#TwitterDown Funny Memes and Jokes Go Viral: As Services on the Microblogging Platform Gets Restored, Netizens Flood Their Timeline With Hilarious Posts! 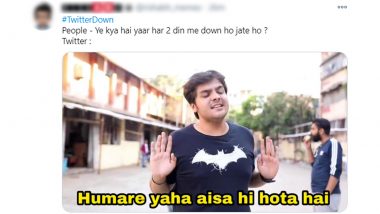 People were unable to use Twitter, post 7:30 pm today, October 28, 2020. According to the website Downdetector, which records real-time outages of major social media platforms, Twitter users were experienced issues for nearly an hour. More than 2,000 people reported the glitch on the networking sites from several parts, majorly from India. The cause of the outage is still not known, but the services have now been restored.

Whenever, Twitter faces outage, the internet is flooded with funny memes and jokes. This time too, the moment, the service was restored on the microblogging platform, netizens rushed to share hilarious memes and jokes, displaying how annoying the one-hour of the outage was.

me when twitter went down for a couple minutes pic.twitter.com/KN1Dpb7UlW

Oh Now You Can!

Earlier this month too, Twitter faced a global outage which encouraged users to flood their timeline with funny posts. As mentioned already, the reason of the outage was not known. Issues were reflected not only on the web version, but also on the Twitter app for iPhone and Android. Now that the service is restored, we hope you can happily tweet and share more funny memes to continue spreading laughter and positivity on the microblogging platform. Happy tweeting!

(The above story first appeared on LatestLY on Oct 28, 2020 10:04 PM IST. For more news and updates on politics, world, sports, entertainment and lifestyle, log on to our website latestly.com).