Users target the WhiteHat Jr kid Chintu, urging him to use coding skill and fix the Google global outage. The reactions are hilarious. While some users continue to struggle to access Google services, people on social media poke fun at Chintu from WhiteHat Jr ad. 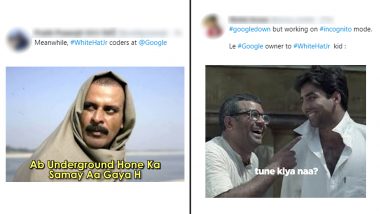 Chintu, from WhitHat Jr coding ad, where he was seen to develop his own app has become the target of funny memes and jokes, once again. This time, netizens poke fun at the kid to fix the technical glitch that made Google services inaccessible for quite some time. While the technical error is reportedly fixed for many users, people cannot stop creating funny memes and jokes with the hashtag #GoogleDown. Users also target the WhiteHat Jr kid Chintu, to use his coding skill and fix the global outage, ASAP. The reactions are hilarious. While some users continue to struggle to access Google services smoothly, people on social media are looking for Chintu from WhiteHat Jr ad to fix the technical glitch.

Google services, including Gmail, Google Doc, YouTube and more faced major outage in the evening today, December 14, 2020. Not only in India, but people across the world were also unable to access the services, making work from home even more challenging. Soon, Twitter was filled with funny memes and jokes, as services went down. Some even blamed 2020 for making things difficult, even for search engine giant, Google. Unable to google as to why Google was facing an error, netizens filled social media platforms with hilarious memes and jokes, among them were Chintu from WhiteHat Jr.

WhiteHat Jr is an Edutech start-up that focuses on imparting coding lessons for kids. The age limit begins as young as six years. The tech firm had already faced significant flak online, and its ad featuring Chintu was the target of funny memes too. So, when Google went down, people tweeted, ‘Where’s Chintu?’ asking the WhiteHat Jr ad kid to use his coding skills and fix the technical glitch soon. In this article, check out the hilarious reactions.

Google is down and only 1 person can do this 😏😏. pic.twitter.com/TvYiIAustp

It was chintu who hacked Google.

People Look for Wolf Gupta Too

Where is Wolf Gupta???

#googledown but working on #incognito mode.

After facing nearly an hour of disruption, major Google services including Gmail, YouTube and more are reportedly working again. In its status update on each of its downed services, Google stated that the problems had been resolved for a vast majority of its users and it is continuing to work towards restoring service for the remaining affected users.

(The above story first appeared on LatestLY on Dec 14, 2020 08:38 PM IST. For more news and updates on politics, world, sports, entertainment and lifestyle, log on to our website latestly.com).