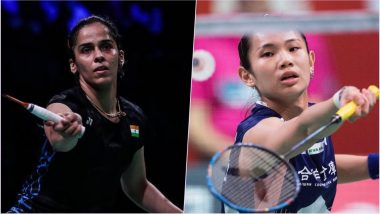 Denmark Open 2018 Super 750 badminton final between Saina Nehwal of India and Tai Tzu Ying of Chinese Taipei will take place on October 21, Sunday. The 28-year-old Hyderabad girl defeated Gregoria Mariska Tunjung of Indonesia in the semi-finals to storm into the finals where World No. 1 Tai Tzu Ying awaits at the final showdown. For all those who are searching for Saina Nehwal vs Tai Tzu Ying, Denmark Open 2018 women’s singles final live streaming online, live telecast on TV channels in Indian time, you will get all the match information below. Saina Nehwal Storms Into Denmark Open 2018 Women's Singles Final, Will Face Tai Tzu-Ying.

Saina Nehwal has had a fantastic campaign at the Denmark Open, Super 750 BWF World Tour badminton tournament series. After surviving an opening round scare against Hong Kong's Ngan Yi Cheung, Saina progressed to the next rounds with an impressive show. Saina outplayed Japanese shuttler and the second seed Akane Yamaguchi 21-15, 21-17 in straight games to advance to the quarter-finals. For a place in the last four, Saina got rid of World No. 7 Nozomi Okuhara of Japan 17-21, 21-16, 21-12. In the semis, the Olympic bronze-medallist beat Mariska Tunjung in straight games 21-11, 21-12.

If you are unable to catch the live action between Saina Nehwal and Tai Tzu Ying, you can simply jump to live streaming online option. The Denmark Open 2018 women's singles final match will be available on Hotstar app and website and Jio TV.

(The above story first appeared on LatestLY on Oct 21, 2018 01:39 PM IST. For more news and updates on politics, world, sports, entertainment and lifestyle, log on to our website latestly.com).