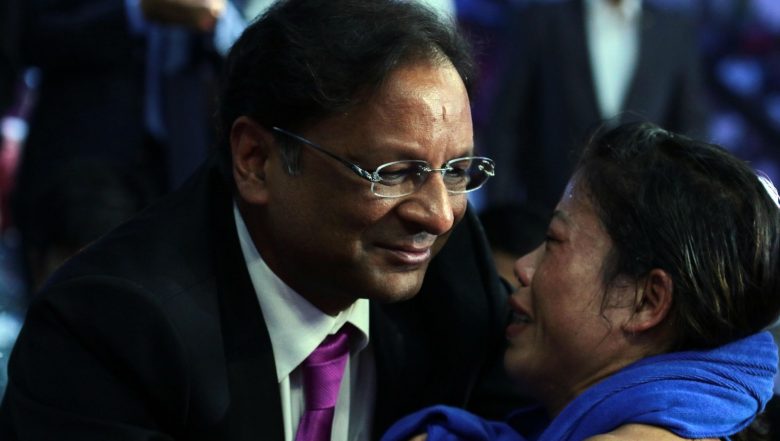 New Delhi, May 2: After a great outing by the Indian pugilist at the recently concluded Asian Championship in Bangkok, Boxing Federation of India (BFI) chief Ajay Singh wants the country to continue performing well at the global level but feels there is more to be done for improving the discipline in the domestic circuit. Pooja Rani Wins Gold Medal at Asian Boxing Championships 2019, Upsets World Champion Wang Lina in Finals.

The Indian boxers bagged a total of 13 medals at the tournament which comprised two gold, four silver and seven bronze. India had sent a 20-member contingent to the championship. Speaking to IANS, Singh expressed happiness on India's performance but also warned to be not satisfied just with it.

"It was a historic show at the championship. I am happy that we won 13 medals but at the same time I feel the journey ahead will be a difficult one as several big tournaments are lying in the near future. We don't need to sit back and relax and should try that our graph keeps getting better. Our boxers did very well but they need to keep the momentum going," he said. The chief however stressed on the need for improvement at the domestic circuit besides organising more tournaments.

"We have to work a lot at domestic level to strengthen it as we need to create a bigger pool of players. At international level, we are playing a number of tournaments," he said.

"We are giving plenty of chances to them at the international level but there is a need to work at national and state level. We are also organising national championship but it's time to work at the local level.

"We have talked to YMCA, which used to organise a championship and are trying to resume it. I feel we should organise open tournaments in every state as it will provide us with more great talents. We will try to boost local championship and so, I said a lot still needs to be done," Singh added.

Due to the tussle between International Boxing Association (AIBA) and International Olympic Committee (IOC), clouds of uncertainty are looming over the inclusion of boxing in the Tokyo Olympic Games. Asian Wrestling Championship 2019: India Finishes at 8th Spot With 16 Medals.

Gafur Rakhimov, an Uzbek businessman and former AIBA chief, has been engulfed in controversy since he was elected in November 2018 because the US Treasury Department has linked him to "transnational criminal organisations" after which the IOC has kept the decision of including boxing in Tokyo 2020 on hold.

Commenting on the controversy, Singh said: "I hope the dispute gets over as soon as possible. We all want boxing to be a clean game and whatever happened in the past, shouldn't happen again."

"AIBA is also trying these issues don't get repeated and there should be transparency. We all are working closely and BFI has also given its views. India has a strong presence in world boxing and so they (AIBA) regularly discuss with us everything. I just want their (AIBA and IOC) relation gets stronger and better," he added.