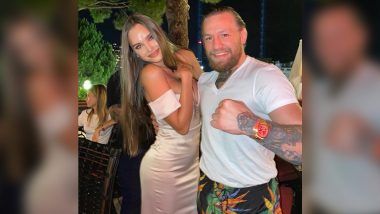 Russian Olympic gymnast Karolina Sevastyanova courted controversy after sharing a picture with UFC fighter Conor McGregor. The 25-year-old, who is an Olympic gold medallist and a double European champion, shard the photo on her Instagram page. She faced backlash for her posture in the picture with many accusing her of getting too close to the Irish fighter. But Karolina has now replied back to her critics and slammed them for getting too close to another man despite being in a relationship. Conor McGregor Praying for Khabib Nurmagomedov’s Father’s Recovery After Being Reportedly Placed in Coma.

Karolina, who is a gymnast-turned-model, posted the picture on Instagram in which she was seen posing with one arm behind McGregor’s back while he also had an arm around her waist and was standing in a fighter’s pose. McGregor was standing with his one arm wrapped around Karolina’s waist while the other fist was clenched as he posed for the picture.

According to reports, the former two-weight UFC champion is holidaying with his family in the French Riveria when the picture was clicked. McGregor’s partner Dee Devlin was also there with his family. It was here that Karolina met McGregor and asked him for a picture. She received many likes and comments on the picture but many fans suggested that the model was getting too close to McGregor. Take a look at some stunning pictures of the Russian model.

Here Is Another of Her Stunning Picture

The 25-year-old has now replied back to all critics through her Instagram page. “Guys, stop asking me these questions! I approached him with my man, and he was with his wife," she wrote in one of her Instagram stories. Sevastyanova retired from Gymnastics in 2012 after winning gold at the London Olympics in a group event.

(The above story first appeared on LatestLY on Jul 26, 2020 11:42 PM IST. For more news and updates on politics, world, sports, entertainment and lifestyle, log on to our website latestly.com).