As England and New Zealand Lock Horns in ICC CWC 2019 Final, Let’s Have a Look At the Final Match Results of the Previous Five Editions 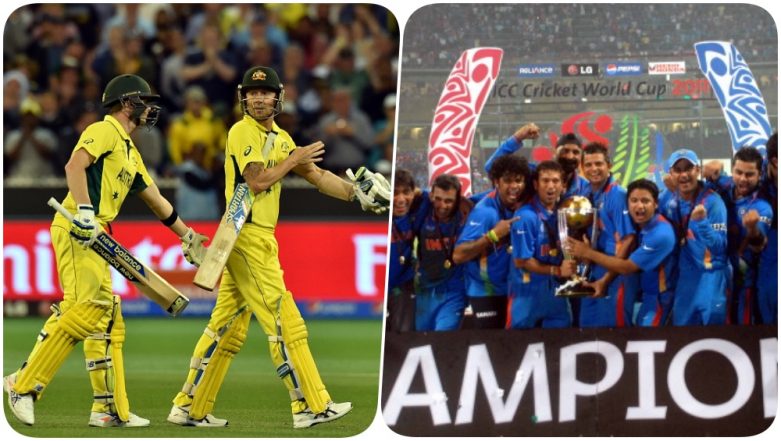 A look at the previous editions of World Cup finals (Photo Credits: Getty)

So now we have the finalists of CWC 2019 as New Zealand and England will lock horns at the Lord’s Cricket Stadium. New Zealand enters the finals of the CWC 2019 with as they defeated India by 18 runs. Whereas England registered a comprehensive victory against Australia by eight wickets. For the first time, we will have the new winners of the World Cup. Ahead of the CWC 2019 finals, let’s have a look at the finals of the last five World Cups. New Zealand vs England Cricket Score Final ODI Match.

Australia and New Zealand locked horns in the finals of the Cricket World Cup in 2015. It was played at the Melbourne Cricket Ground in Melbourne. New Zealand won the toss and elected to bat first and posted a total of 183 runs on the board. Australia won the game by seven wickets. James Faulkner became the Man of the Match as he snapped three wickets for 36 runs.

The Men in Blue played the finals of the Cricket World Cup 2011 at the Wankhede Stadium against Sri Lanka. Sri Lanka won the toss and elected to bat first and posted a total of 274 runs. In reply, Gautam Gambhir made 97 runs and play a primary role in India's victory.

Played at the Kensington Oval, Barbados. Australia defeated Sri Lanka by 53 runs (under the Duckworth–Lewis method) to win their 4th World Cup and 3rd in succession. Australia won the toss and elected to bat and made 281 runs for the loss of four wickets. In the end, Sri Lanka made 215 runs and the team won the game by 53 runs.

With the hopes of clinching the World Cup for the second time, Sourav Ganguly and men locked horns against Australia at the Wanderers Stadium in Johannesburg. The Australian team won the game by 125 runs as they made 359 runs and in reply, the Men in Blue bundled out on 234 runs.

Pakistan made way into the finals of the CWC 1999 and was hoping to relive the memories of 1992 World Cup as they locked horns against Australia. But at the end of it, Australia walked away with the last laugh as they defeated Pakistan by eight wickets.

It will be interesting to watch who clinches the World Cup for the first time and will be crowned as the winner. The match will be held on Sunday, July 14 2019 and the two teams will leave no stone unturned to win the game,