Earlier, resuming the day at 241/6, Mark Wood gave England their first breakthrough of the day. The pacer bowled a short ball to dismiss Mitchell Starc (3). Australia skipper Cummins (2) was the next one to go. 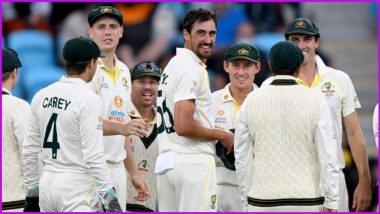 Continuing their domination in the series, Australia retained the upper hand on the second day of the fifth and final Ashes Test, despite England's late fightback. England were bowled out for 188 in their first innings, conceding a lead of 115 runs, but they picked up three Australian wickets -- David Warner (0), Usman Khawaja (11), Marnus Labuschagne (5) in the third session to pull things back. Steven Smith (17 not out) and nightwatchman Scott Boland (3 not out) were at the crease as Australia finished Day 2 at 37-3 in their second innings, leading England by 152 runs. AUS vs ENG 5th Ashes Test 2021-22: England Reach 34/2 at Dinner, Trail Australia by 269 Runs on Day 2 of Final Match.

As many as 17 wickets fell in the day at the Bellerive Oval in Hobart as Australia and England wrestled for control. Australia didn't have a good start in their second innings as Stuart Broad sent back David Warner for his second duck in the ongoing Test. Chris Woakes and Mark Wood too got into the act, the former dismissing Marnus Labuschagne and the latter getting the better of Usman Khawaja with a snorter to leave Australia reeling at 37/3.Earlier, resuming the day at 241/6, Mark Wood gave England their first breakthrough of the day. The pacer bowled a short ball to dismiss Mitchell Starc (3). Australia skipper Cummins (2) was the next one to go.Australia were eight down for 252 but Nathan Lyon played a counter-attacking knock to revive the hosts' innings. Lyon finished with 31 off 27 and added another 23 for the final wicket with Scott Boland (10 not out) to take Australia to 303 in their first innings. Meanwhile, check out stat highlights from day two of 5th Ashes Test:

# A total of 17 wickets fell on day two of the fifth Test.

# David Warner was out for a pair (duck in each innings) second time in his Test career.

# Pat Cummins now has third-most wickets in a Test series on debut as captain for Australia.

Starting the innings for England, Rory Burns was run out for a duck. Burns's opening partner Crawley (18) enjoyed a more positive start, playing three delectable drives before he was dismissed by Pat Cummins. Resuming the second session from 34/2, Root and Malan began well. With runs flowing easily, Australian skipper Cummins was forced to bring Starc and himself into the attack. The left-arm pacer went for 13 in his first over but Cummins ended the 49-run stand by strangling Malan down the legside.

After Malan's departure, Cummins got rid of his counterpart. England slid further when Ben Stokes was dismissed with score reading 85/5. Boland then returned to the attack and got Ollie Pope nicking to the wicket-keeper. Including Woakes, England lost their last three wickets in the space of six runs, conceding a heavy lead. Broad and Woakes then struck early with the ball to send back Warner and Labuschagne and give England a bit of hope.

(The above story first appeared on LatestLY on Jan 15, 2022 10:34 PM IST. For more news and updates on politics, world, sports, entertainment and lifestyle, log on to our website latestly.com).