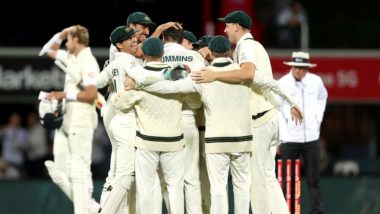 Australia thrashed England by 146 runs in the fifth and final Test on Day 3, to clinch the 2021/22 Ashes series 4-0. England were 68/1 at Tea but they suffered a massive collapse to get bowled out for 124 in their second innings in the third session of the Day-Night Hobart Test.   Zak Crawley (36) was the highest scorer for England while Pat Cummins (3/42), Scott Boland (3/18) and Cameron Green (3/21) shared three wickets each for Australia. Australia Beat England by 146 Runs, Win Ashes Series 4-0.

Resuming the third and final session on Day 3 at 68/1, England batters Dawid Malan and Zak Crawley added 14 more runs to the total, but Australia came storming back as Cameron Green dismissed Malan (10) and Crawley (36) in quick succession, reducing England to 83/3 in the 23rd over. Left-handed batter Ben Stokes (5) failed to leave a mark with the bat. Nine runs later, Scott Boland went through Root's (11) defence, and England found itself reeling at 101/5.

Boland struck once again and this time he sent Sam Billings (1) back to the pavilion and hence England was in danger of losing the fifth Ashes Test inside three days. In the very next over, Ollie Pope (5) was bowled by skipper Pat Cummins and the wheels started to come off for England. Meanwhile, check out stat highlights from AUS vs ENG 5th Test day 3:

# England batsmen finish the series averaging 19.18 per dismissal - their fifth lowest ever in Ashes.

# Steven Smith's Test average falls below 60 for the first time since the start of Ashes 2017/18.

# Alex Carey becomes the first Australian wicket-keeper to be dismissed on 49 in an Ashes Test match!

# Australia have now won their ten out of ten day-night Test matches.

In the end, the Three Lions were bowled out for 124, handing Australia a 146-run win in the fifth and final Ashes Test.  Earlier in the day, Australia were bowled out for 155 in the second innings, setting England a target of 271 to win. For Australia, Alex Carey top-scored with a knock of 49 while Mark Wood scalped six wickets for England.

(The above story first appeared on LatestLY on Jan 16, 2022 05:43 PM IST. For more news and updates on politics, world, sports, entertainment and lifestyle, log on to our website latestly.com).