The contest will see youth locking horns with experience, a team who hadn’t won a Playoffs’ match until last night vs the team that has made a record number of appearances in the IPL Finals. 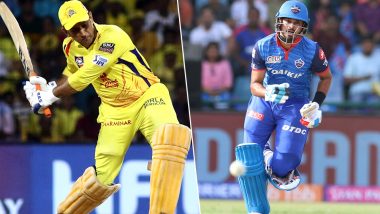 The Indian Premier League (IPL) 2019 has been a roller-coaster ride of emotions for the fans so far. Welcome to the semi-final, (read: Qualifier 2) match of the IPL 12, where it will be Chennai Super Kings (CSK) clashing against Delhi Capitals. The match will be played at Dr Y.S. Rajasekhara Reddy ACA-VDCA Cricket Stadium, in Visakhapatnam. The winner of the contest will face Mumbai Indians in the IPL 2019 Final, on May 12. CSK vs DC Head-to-Head Record: Ahead of IPL 2019 Qualifier 2 Clash, Here Are Match Results of Last 5 Chennai Super Kings vs Delhi Capitals Encounters!

The contest will see youth locking horns with experience, a team who hadn’t won a Playoffs’ match until last night vs the team that has made a record number of appearances in the IPL Finals. In a nutshell, it will be a cracker of a night for the fans!

It is difficult to determine or predict the winner between the Delhi Capitals and Chennai Super Kings. However, taking their head-to-head record, form, strengths and weaknesses and other factors into the consideration, we at LatestLY bring you the winning prediction and winning chances in CSK vs DC, IPL 2019 Qualifier 2 match. CSK vs DC, IPL 2019 Qualifier 2, Key Players: Shikhar Dhawan, MS Dhoni, Rishabh Pant And Other Cricketers to Watch Out for at VDCA Cricket Stadium in Visakhapatnam.

Delhi Capitals are in the form of their life, and are having a dream run in this IPL season. Their first win in the Playoffs’ game is enough testimony to their successful campaign this year. Delhi is only a step away from sealing their spot in the Final – which will be the franchise’s first IPL in the league’s history.

On the other hand, it is a routine affair for the Chennai Super Kings to feature in the IPL Playoffs (and also winning it). Chennai had a great start to their season this year but have faltered comprehensively of late. For them, complacency will be a bigger factor to defeat. The injury scare of Kedar Jadhav can force them to rejig their already-faltering middle order.

In IPL 2019, Chennai Super Kings won both the matches against Delhi Capitals. In their first match, Chennai chased the par total of 147 runs with ease; however, the match di went till the last over. In the second match, Delhi’s listless performance handed Chennai their second win over them, this time by a huge margin of 80 runs.

Delhi Capitals has had a spectacular season this year. After some hot-and-cold performances in the start of the season, the team is on a rampaging form recently. In 14 matches, Delhi won 9 and lost 5 games, which earned them 18 points. They ended the league stage on the third position. Their last-over victory against in Qualifier 1 was nothing less than sensational.

On the other hand, Chennai Super Kings had a contrasting season. They won 7 of their first 8 matches; however, managed to win in only 2 out of the following 7 matches. In 14 matches, they earned 18 points and were on the top of the league’s standings for quite a long time, before their form nosedived.

Who will win CSK vs DC IPL 2019 Qualifier 2 match tonight?

If you go on the current form, it is Delhi Capitals. If you go on the past records, it is Chennai Super Kings. Do you think it is that easy? Well, it is not. There are a lot of other factors to look up to before the prediction is made; let us look at some.

The head-to-head record of Chennai Super Kings vs Delhi Capitals suggest that it will be CSK who will march into the IPL 2019 Finals. In 20 games they have played between them, Chennai has won on a whopping 14 number of occasions. The Delhi side, however, has managed to win only 6 matches.

In their last 5 games, Chennai Super Kings have won 3 games; whereas the Delhi Capitals have emerged victorious in 2 contests. Here too, it is Chennai which has an edge over their opponents Delhi.

However, one cannot discard the current red-hot form the Delhi Capitals team is in. Their top order is firing, and so is the middle order. The bowling unit is missing the services of their strike bowler Kagiso Rabada, nonetheless, they have performed collectively – something which the CSK hasn’t managed to do so this time around.

Chennai Super Kings would be looking to make the most of their experience against one of the least experienced sides in the IPL playoffs. On the other hand, Delhi Daredevils have had one ‘marvellous’ season this year and would do ‘whatever it takes’ to step their foot in the first IPL in the history of the league. Stay tuned to LatestLY for all the latest news and updates about Indian Premier League (IPL) 2019.

(The above story first appeared on LatestLY on May 10, 2019 12:56 PM IST. For more news and updates on politics, world, sports, entertainment and lifestyle, log on to our website latestly.com).