KKR and CSK have both won two matches each and are currently the only in-form sides alongside Delhi Capitals. This match would make a world of difference to the playoff spots as both are very much in contention to make it to the last four. Chennai need another win to almost guarantee a spot while Kolkata need to win to strengthen their chances and capitalise on failures of other sides. 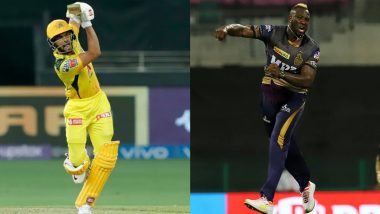 Chennai Super Kings (CSK) would lock horns with Kolkata Knight Riders (KKR) in match 38 of the Indian Premier League on Sunday, September 26. The match would be played at the Sheikh Zayed Cricket Stadium in Abu Dhabi and has a start time of 3:30 PM IST (Indian Standard Time). Both sides have been in very good form in the UAE leg of IPL 2021 and the result of this clash would have a big impact when it comes to determining the four sides to make it to the playoffs. Eoin Morgan's Knight Riders have expressed themselves freely and been absolutely dominant in the two games that they have played. CSK vs KKR, IPL 2021 Live Cricket Streaming: Watch Free Telecast of Chennai Super Kings vs Kolkata Knight Riders on Star Sports and Disney+Hotstar Online

MS Dhoni would also be quite happy with his side's showing in the matches against Royal Challengers Bangalore and Mumbai Indians so far both teams would be ready to add another chapter to their illustrious rivalry. Meanwhile, let us take a look at the captain and vice-captain's pick for this game.

There's not many who would question the impact that Andre Russell brings to a T20 game and he has been one of KKR's best players over the years. This time in the UAE,  Russell did not have a hit  with the willow yet but has performed well with the ball whenever his captain has needed him. Also he is very good in the field and once again, he would be a very important asset for the Knights.

The young Indian opener has been one of the reasons for Chennai Super Kings' success and his form with the bat would once again be crucial for his side in this match. He would be a good choice for the vice-captain's slot, given the fact that he has been very consistent and is expected to perform.

(The above story first appeared on LatestLY on Sep 26, 2021 11:02 AM IST. For more news and updates on politics, world, sports, entertainment and lifestyle, log on to our website latestly.com).