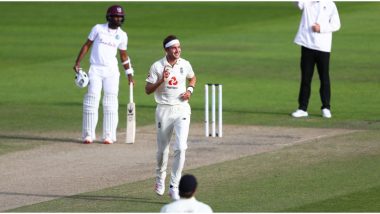 Stuart Broad punished West Indies once again and left them on the brink of a series defeat at stumps on day 3 of the ENG vs WI 3rd Test. Broad dismantled West Indies earlier in the day to bundle them for 197 and hand England a healthy lead of 172 runs before returning late with the ball to pick two wickets in the second innings and leave the visitors starring at a mighty task ahead. With two days yet to be played – although have serious rain forecast – Windies must chase down 389 or bat through all sessions to save the Test match or lose the series. England vs West Indies 3rd Test 2020 Day 3 Highlights.

West Indies, however, looked the better side in the opening hour of play on Day 3 with captain Jason Holder and Shane Dowrich avoiding the follow-on with some smart runs. But that before Broad was introduced into the attack. When he entered, Broad castled Holder in his third delivery to break the 68-run partnership and then ran through Rahkeem Cornwall, Kemar Roach and Dowrich to bundle the visitors for 197. Broad finished with a six-wicket haul and England were handed a 122-run lead.  Ben Stokes Clarifies ‘Hilarious’ Speculations Over Mysterious Brown Stain on Backside of His Pants, Says He Hadn’t P**ped (Watch Video).

Rory Burns and Dominic Sibley then toyed with the attack not by attacking but by patiently stealing singles and finding occasional boundaries to keep the scoreboard ticking. West Indies’ sloppy fielding and sluggishness helped the hosts. Both Burns and Sibley completed half-centuries and also shared a century-run opening stand, England’s first in Test matches at home since 2016. Sibley then was dismissed by Holder but Burns continued. Take a look at some stat highlights from Day 3 of the England vs West Indies 3rd Test match.

#Jason Holder became the third West Indies cricketer to take 100-plus wickets and also score over 2000 runs in Test matches. Gary Sobers (235 wickets and 8032 runs) and Carl Hooper (114 wickets and 5762 runs) were the only other Windies players to achieve this feat before Holder

#Jason Holder is the ninth captain to take 100 Test wickets and is second from the West Indies. Gary Sobers (117) is the other West Indies skipper to take 100-plus wickets as captain. Former Pakistan captain Imran Khan (187) has taken the most wickets as a Test skipper

#Rory Burns and Dom Sibley are the first England opening pair since 2016/17 to score half-centuries in the same innings. Alastair Cook and Haseeb Hameed were the last pair to do so and they had done it against India in Rajkot.

#Burns and Sibley are also the first England opening pair to stitch a hundred-run opening partnership in Test matches at home since Cook and Alex Hales in 2016.

Joe Root came and plundered the runs and also completed his half-century as England put 74 runs from the final 10 overs of their innings. Burns looked set for a hundred but fell to Roston Chase just 10 runs short of what could have been a magnificent century. England declared immediately and the Windies were set a target of 399 runs.

The visitors had to bat two full days and 6 overs on Day 3. Those six overs were just enough for Broad to take two more wickets and gone now wicket shy of a 500th Test scalp.

(The above story first appeared on LatestLY on Jul 27, 2020 01:28 AM IST. For more news and updates on politics, world, sports, entertainment and lifestyle, log on to our website latestly.com).