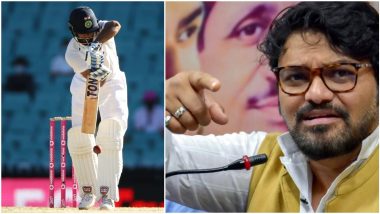 While fans lauded Hanuma Vihari’s resilience in the third Test against Australia which earned India a famous draw at the Sydney Cricket Ground, Bhartiya Janta Party (BJP) MP Babul Supriyo criticized the batsman’s defensive approach. Vihari scored 23 off 161 balls on the fifth day, taking his side to safety. However, Supriyo opined that the batsman’s slow knock has ‘murdered’ Cricket. “Playing 109 balls to score 7 ! That is atrocious to say the least•Hanuma Bihari (sic) has not only killed any Chance for India to achieve a historic win but has also murdered Cricket.. not keeping win an option, even if remotely, is criminal. PS: I know that I know nothing abt cricket,” he had tweeted during the game. Injured Hanuma Vihari Vows to Come Back Stronger.

Expectedly, the singer faced a lot of backlash for his remarks as the 27-year-old played the match-saving knock with a hamstring injury. Now, Vihari has also reacted to Supriyo’s criticism but in a super savage style. While he didn’t clarify his approach, the batsman just pointed out the wrong spelling in the politician’s post. Instead of Vihari, Supriyo wrote his surname ‘Bihari’, and the cricketer didn’t miss out the opportunity in highlighting the mistake. “*Hanuma Vihari,” he commented on Supriyo’s post. Rishabh Pant, Hanuma Vihari Took Heavy Dose of Pain-Killers to Earn India Historic Draw.

Meanwhile, Vihari has been ruled out of the fourth and final Test at the Gabba in Brisbane due to his hamstring injury. With the series still levelled at 1-1, the upcoming clash will be a decider, and the visitors have been reduced to a second-string team due to their injury woes. The encounter gets underway on January 15, and India’s playing XI is to watch out for.

(The above story first appeared on LatestLY on Jan 13, 2021 04:19 PM IST. For more news and updates on politics, world, sports, entertainment and lifestyle, log on to our website latestly.com).