ICC made a ridiculous blunder on its social media pages on April 27 (Tuesday). The ICC shared a picture of Lahiru Thirimanne playing a straight drive but tagged Dimuth Karunaratne in the pic. Fans immediately pointed out the blunder. The official Facebook fan page of Karunaratne also commented on the pic. ICC later corrected the error. 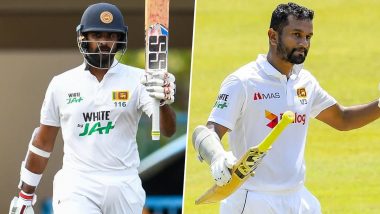 ICC found itself in a difficult situation on April 27 (Tuesday) after wrongly tagging Sri Lanka skipper Dimuth Karunaratne in a post of Lahiru Thirimanne. Karunaratne starred in Sri Lanka’s draw with Bangladesh in the first Test with the Lanka skipper scoring a fine double century. Thirimanne also played a handy knock and scored a half-century. Two days after Sri Lanka vs Bangladesh Test ended in a draw, ICC shared a picture of Thirimanne playing the straight drive and wrongly tagged Karunaratne in the post. Bahat Tez Ghumaya Ye: Rishabh Pant’s Hilarious Remarks Caught in Stump Mic During DC vs RCB Clash (Watch Video).

ICC captioned the image of Thirimanne as “Precision. Elegance. Poise” and tagged Dimuth Karunaratne in the post. Fans were quick to notice the error and pointed it out. “Dear ICC, he is Thirimanne, not Karunaratne,” a fan commented on the post on Facebook. The official Facebook fan page of the Lanka skipper, which impersonates Karunaratne, also responded to the post and wrote "That's not me." IPL 2021: Amit Mishra, Delhi Capitals Spinner, Applies Saliva on Ball During Match Against RCB, Umpire Gives First Warning. The official social media pages of the International Cricket Council (ICC) had shared the post on all of its pages and wrongly tagged Karunaratne in all of those posts. The ICC later deleted the post from Twiter and amended the mistake on other platforms and tagged Thirimanne in the post. Take a look at the Facebook post.

Karunaratne and Thirimanne shared a 114-run opening stand in the first Test against Bangladesh. Karunaratne went on score a double century, his maiden double hundred in Test cricket. Karunaratne’s knock of 244 is also the second-highest individual score by a Sri Lanka captain in Test matches. His knock of 244 runs came in 437 deliveries and was studded with 26 boundaries.

(The above story first appeared on LatestLY on Apr 28, 2021 12:36 AM IST. For more news and updates on politics, world, sports, entertainment and lifestyle, log on to our website latestly.com).