A much better understanding of the game has been the driving force behind David Miller's rich vein of form in IPL 2022 and now, with the series against India starting from Thursday, the left-handed batter is confident of carrying the good work for Gujarat Titans to South Africa. 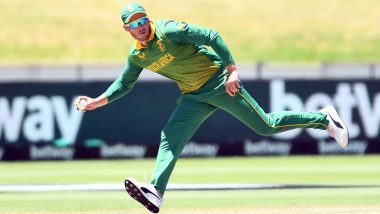 New Delhi, June 8: A much better understanding of the game has been the driving force behind David Miller's rich vein of form in IPL 2022 and now, with the series against India starting from Thursday, the left-handed batter is confident of carrying the good work for Gujarat Titans to South Africa. Miller was one of the key players for the Titans winning the IPL 2022 trophy on their home ground in Ahmedabad. He had his most prolific IPL 2022 season, amassing 481 runs an average of 68.71 and a strike rate of 142.73 while batting in the middle order, leading to Proteas skipper Temba Bavuma hinting that he could be given the No. 5 slot and face more balls in the series against India. IND vs SA, 1st T20I 2022: Dinesh Karthik, Hardik Pandya in Focus As India Resume Road to World Cup Against South Africa.

"I wouldn't say I have done anything different. Being around for a long time now, one grows and matures in the role I play for so many years, I understand my game a lot better. I still get nervous and go through negative thoughts but I can deal with that pressure a lot better. Understanding my game better in what I need to do has helped," said Miller in a video by Cricket South Africa (CSA). "Scoring the amount of runs I did and closing out a couple of games for the team in the IPL was something that I looked forward to before the tournament. Batting in the middle-order, you always do want to finish off games. So I do pride myself on that and it was nice to tick that box," added Miller, who is just five matches away from completing a century of T20I appearances for the Proteas.

Miller now wants to win the series for South Africa by replicating what he did with Gujarat in their run to trophy in IPL 2022. "Along with that, being successful as a team and winning the trophy was definitely a highlight. Looking into this series now, I want to do much the same. That's been my objective and goal for many years now to try and win games for the team. Really enjoy the space that I'm in along with the experience we have with the guys. We've been playing for a couple of years together and building up a strong team." He further felt that as he gained experience while playing international cricket, dealing with pressure is something which has become better now. IND vs SA Preview: Likely Playing XIs, Key Battles, Head to Head and Other Things You Need To Know About India vs South Africa 1st T20I 2022.

"No extra pressure or weight on my shoulders. Every international game I've played, regardless of responsibility, regardless of being senior or junior, there's always a sense of pressure. So, I don't think it changes at all. As I mentioned, with the experience that I have now, I deal with that a lot better so." Miller is also looking forward to sharing his knowledge of playing in Indian conditions with the Proteas apart from his other country-mates who featured in IPL 2022. "It's quite a nice feeling to know that I've been at the IPL for so many years, and can impart knowledge on to Temba and the team. But saying that, there's few other guys who have also played in the IPL. So, as a team, we've got a lot of experience in the changeroom and it's a good place to be in."

Miller, who turns a year older on Friday, took a small break to Maldives after IPL 2022 ended and is now refreshed to turn out for South Africa against India. "It's been quite challenging. Two months of IPL, been quite busy, lot of games. But I feel really, really good in the last couple of years on my physical side of things. I feel good to go, fresh, ready to go. I had a two-day break in Maldives and it was pretty good for the mind. But back into the swing of things and really feeling good to go."

(The above story first appeared on LatestLY on Jun 08, 2022 01:20 PM IST. For more news and updates on politics, world, sports, entertainment and lifestyle, log on to our website latestly.com).