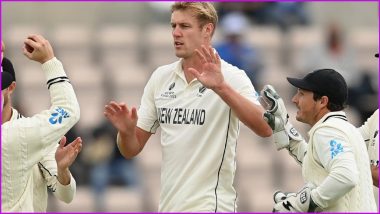 Months before the Covid-19 pandemic brought the entire world to a standstill, India toured New Zealand as the top-ranked side in the world for two Test matches. New Zealand won by 10 wickets at Wellington and 7 wickets at Christchurch.

New Zealand’s heroes were the usual suspects, Tim Southee (14 wickets at 13.14) and Trent Boult (11 at 19.36). But the surprise package was the tall, enormous Kyle Jamieson, who played the first two Test matches of his career. Jamieson got 9 wickets at 16.33, and scored 93 runs in two innings.

India stepped up a notch in Christchurch. They scored 252, then reduced New Zealand to 177/8 despite Ishant’s absence. And yet again Jamieson hit back, this time with 49. India still managed a 7-run lead. At 51/2, with Pujara and Virat Kohli at the crease, they might have pushed for a score past 200.

Instead, they were bowled out for 124. Tom Latham (52) and Tom Blundell (55) then added 103 for the opening stand to knock them out of the Test match.

(The above story first appeared on LatestLY on Jun 21, 2021 08:19 PM IST. For more news and updates on politics, world, sports, entertainment and lifestyle, log on to our website latestly.com).