IPL 2019 Prediction: Gautam Gambhir Predicts CSK and RCB Will Not Qualify for Playoffs 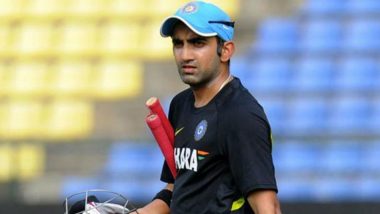 It is Indian Premier League (IPL) season and former cricketers and experts are out with their predictions. Former Kolkata Knight Riders (KKR) Gautam Gambhir has predicted four teams who he thinks will make it to the playoffs. Interestingly, Gambhir has left out defending champions Chennai Super Kings (CSK), led by MS Dhoni. Apart from CSK, Gambhir feels Virat Kohli’s Royal Challengers Bangalore will also fail to make it past the first round. India vs Pakistan ICC Cricket World Cup 2019: No Problem in Forfeiting Two Points, Gautam Gambhir Endorses Boycott of Match Against Rivals.

Gambhir almost forgot to name Knight Riders and exclaimed “how can I forget KKR!” While Super Kings happen to be one of the pre-tournament favourites, Gambhir surprised one and all by not naming the defending champions.

Last season, Sunrisers Hyderabad, Chennai Super Kings, Kolkata Knight Riders and Rajasthan Royals made it to the last four. And CSK eventually lifted the trophy by defeating SRH in the final. The IPL 2019 begins on March 23 with CSK taking on RCB at home.

(The above story first appeared on LatestLY on Mar 19, 2019 03:04 PM IST. For more news and updates on politics, world, sports, entertainment and lifestyle, log on to our website latestly.com).