Along with sweating it out at the nets ahead of the IPL 2018, Shah Rukh Khan’s team Kolkata Knight Riders is definitely having a great time together as a unit. 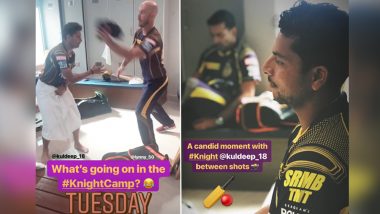 Along with sweating it out at the nets ahead of the IPL 2018, Shah Rukh Khan’s team Kolkata Knight Riders is definitely having a great time together as a unit.  Now, currently the team is shooting for a commercial and the official page of KKR posted behind the scenes of the same on their Insta story.

The ad is being shot by Andre Russel, Dinesh Karthik, Shubham Gill and a few other members of the team. The team looked quite happy and was also seen sharing an intense conversation between the shots. But what caught our eye was spinner Kuldeep Yadav sitting in towel and KKR jersey in the dressing room. 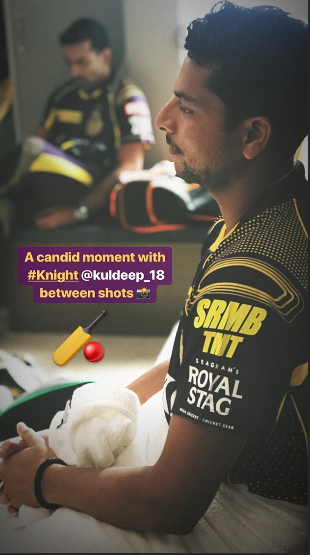 And in the next Insta story, which is a boomerang, we see Kuldeep Yadav grabbing his towel tightly and JP Duminy messing up with the Indian spinner. 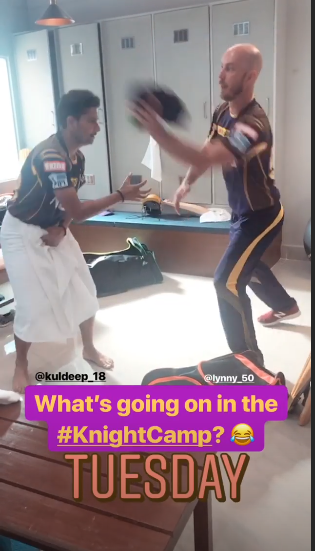 JP Duminy & Kuldeep Yadav (Photo Courtesy: Instagram/kkriders)
Talking about KKR, the team will be led by Dinesh Karthik who landed in the city of joy only a couple of days ago and the skipper was elated to handle the reins of the team.

The team is often seen at the Eden Gardens practicing for the big season ahead. Players like Piyush Chawla, Robin Uthappa, Shubham Gill and a few others have reached Kolkata a bit long ago. The official page of the team keeps posting videos and pictures of the players hitting the nets.

Yesterday, the team welcomed Australian pacer Mitchell Johnson to the squad. They shared snap of the bowler chilling in Kolkata.

After Gautam Gambhir went to Delhi Daredevils, Dinesh Karthik was handed the captaincy of Knight Riders. The two-time champions open their campaign against Royal Challengers Bangalore (RCB) on April 8 at Eden Gardens. Tickets of the matches have already gone on sale.

(The above story first appeared on LatestLY on Apr 03, 2018 02:08 PM IST. For more news and updates on politics, world, sports, entertainment and lifestyle, log on to our website latestly.com).