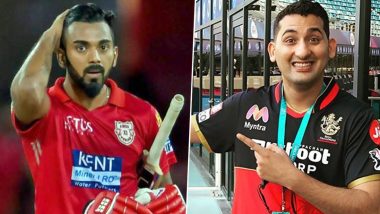 Kings XI Punjab will be irked by the super over defeat to Delhi Capitals in their opening match of IPL 2020 despite being the favourites to win the match. In a game, where fortuned swayed from one side to another, Punjab were left needing one run from three deliveries to win the game. But they ended up losing two-wicket and a dot ball to tie the match before losing the super over. The most hilarious aspect of the game, however, came when Delhi Capitals were batting in the first innings. Kings XI Punjab captain KL Rahul was caught abusing in Kannada while asking a fielder to change position and RCB’s Mr Nags trolled the KXIP captain later for his language.

Rahul was caught abusing in his mother tongue in the stumps mic while asking a field to move along. Rahul could be heard telling a fielder “Mundhe baaro lo**a” during the Delhi Capitals’ innings. But the KXIP skipper soon realized that his words could be heard in the stump mic and he immediately stopped. Danish Sait, who is currently with RCB and is popularly known as Mr Nags, later trolled Rahui; for hurling abuse during the game.

Rahul posted on his Instagram following the match and captioned it “What a cracker of a start to the IPL. Special effort by the team,” along with a series of images. Sait commented on the post and repeated the exact words said by Rahul in the match and trolled the KXIP captain. Mayank Agarwal also commented on the post and trolled Rahul for his comments. Check out the post.

What a cracker of a start to the IPL. Special effort by the team 💥

Meanwhile, Agarwal was the star of the match. He top-scored for KXIP with 89 off 60 deliveries and almost singlehandedly guided them to a win. Agarwal, however, failed to take KXIP to a win despite being on the strike when they needed one run from three deliveries. He missed one ball and was dismissed on the next delivery while trying to clear the boundary. Marcus Stoinis was the start for Delhi Capitals.

(The above story first appeared on LatestLY on Sep 22, 2020 09:27 PM IST. For more news and updates on politics, world, sports, entertainment and lifestyle, log on to our website latestly.com).