MI vs CSK IPL 2019 Final: It Is Hardik Pandya vs Imran Tahir Among Key Battles for Mumbai Indians vs Chennai Super Kings 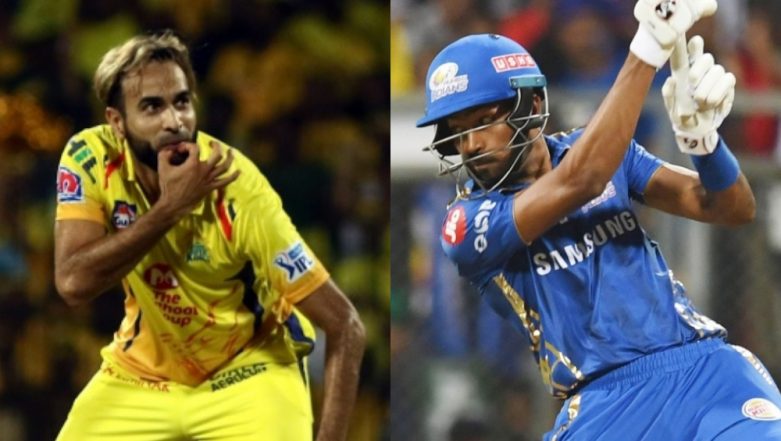 The fourth encounter between Mumbai Indians and Chennai Super Kings this season will decide who gets to lift the 2019 Indian Premier League trophy. The two teams have been a joy to watch this season with continuous levels of dominance throughout the campaign. Some of the cricket on display by these two franchises has won the admiration of even the rival fans. But now both Rohit Sharma and Mahendra Singh Dhoni will be looking to outsmart each other as they walk out one last time this season. The game will be defined by fine margins with some big names clashing. Here we take a look at the key battles that will have a resonating effect on the outcome of the clash. Mumbai Indians vs Chennai Super Kings Live Cricket Score IPL 2019 Final T20 Match.

Faf Du Plessis vs Jasprit Bumrah: South African opener Faf Du Plessis is known for calm nature even under the toughest of conditions. CSK depend on Fad Du Plessis for bright starts and that will not be easy when facing Indians speedster Jasprit Bumrah who is a rage in T20 cricket with his accurate line and length. If Burmah gets Du Plessis early, CSK can find themselves in a spot of bother. IPL 2019 Final, MI vs CSK Match Preview: Mumbai Indians, Chennai Super Kings Look For Record 4th Title.

Mahendra Singh Dhoni vs Rahul Chahar: MSD has been in fine form this season helping his team win important games and is adept to play in several positions in the batting order. He is suspect though against the spin sometimes and this is where youngster Rahul Chahar can capitalise with his variations on a Hyderabad track that always has something for the spinners.

Rohit Sharma vs Deepak Chahar: Deepak Chahar has been a wicket-taking option for the Chennai Super Kings in the first six overs where his economy rate is extremely good for T20 cricket. He will come up against Mumbai skipper Rohit Sharma who likes to dominate in the powerplay. If Rohit Sharma is able to dictate the temp at the start, Mumbai Indians will be confident of a good batting display. MI vs CSK Head-to-Head Record: Ahead of IPL 2019 Final Clash, Here Are Match Results of Last 5 Mumbai Indians vs Chennai Super Kings Encounters!.

Hardik Pandya vs Imran Tahir: The hard-hitting Hardik Pandya who has little regard for the bowlers in the opposition rank versus veteran spinner Imran Tahir is a mouth-watering clash. Pandya often comes lower down the order where there is pressure to score quick runs and we have not seen Imran Tahir being dominated this season. Hence it should be a good contest between bat and bowl.

Chennai Super Kings will have to play out of their depth to defend their title but given their form against Mumbai Indians this season, this looks highly improbable.