Former India captain and IPL side Chennai Super Kings stalwart Mahendra Singh Dhoni has stressed that district cricket is the most important things for budding cricketers, which opens the door for them to play state-level cricket and then pitchforks them into national limelight, adding that no player can reach the top level without going through this process. 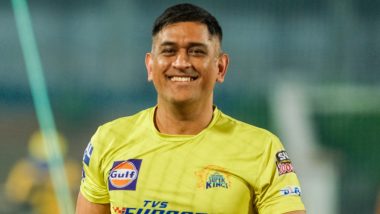 Chennai, June 3: Former India captain and IPL side Chennai Super Kings stalwart Mahendra Singh Dhoni has stressed that district cricket is the most important things for budding cricketers, which opens the door for them to play state-level cricket and then pitchforks them into national limelight, adding that no player can reach the top level without going through this process. "Initially when I started playing cricket, the want, or the will was to score in that tournament. Why? Because, you could represent your district. Why do you want to represent your district? So that when you play an inter-district tournament and you do well, and you are called for the selection trials for the state," said the skipper of one of the most successful IPL teams, which has bagged four titles --one less that Mumbai Indians. WI vs NED, 2nd ODI: West Indies Beat Netherlands by 5 Wickets, Take Unassailable 2–0 Series Lead.

"And, I feel that is the urge that all you (young) cricketers need to have. And, what is very important is to be proud of the district that you represent, because when we start playing cricket, you want to play for school and do well for the school. But ultimately, you want to get selected for the district team. From district, you want to do well and get selected for the state. Then, you want to compete at the Ranji Trophy level and ultimately, you want to represent India," said the stalwart while attending the 25-year celebration of the Thiruvallur Cricket Association. "We are celebrating the success of a district cricket association. So, a lot of that I will speak is also to thank my district cricket association back home. When we talk about the grassroots-level of cricket, what you really need is cricket from where it starts, and where it is governed.

"And, I always felt for me grassroots cricket was school-level cricket, because it is a place where you want students to play all the different sports, but at the same time the responsibility comes to the district cricket association to organise a cricket tournament where all the schools of the district, they make sure that it is prestigious enough to compete," said Dhoni. Dhoni felt that with more number of cricketers competing for a place in the district team, there will be more competition, which, in turn, will lead to better players moving up in their pursuit of national team berths. England vs New Zealand, 1st Test: Kiwis Strike Back To Maintain Balance Against Hosts on Day 1.

"The more the number of cricketers who are competing to get selected for the district team, the more the competition, the better the chances of the cricketers getting better ultimately helping not only the district, but the state cricket association in turn. So today, I would like to thank my Ranchi District Cricket Association for organising all the different categories of school-level cricket that was organised at that point of time, and more often than not, more of the states they follow the same blueprints. So, for us it was Class 10, Class 12 more like U-16 and U-19 tournaments.

"I am proud of the fact that I got a chance to represent my country, but it would not have started if I have not played for my district, if I have not played for my school. So, that feeling of being proud for being a part of the district is very important. Because, if it does not start at that level, we will not really represent the country. "So, I feel always the responsibility of the district cricket association is huge because year after year, what is one of the most difficult things to achieve is to try and make sure that the schools are motivated enough to make a team. And then to compete and make that tournament prestigious enough for everyone to compete and do well," added Dhoni.

(The above story first appeared on LatestLY on Jun 03, 2022 10:47 AM IST. For more news and updates on politics, world, sports, entertainment and lifestyle, log on to our website latestly.com).