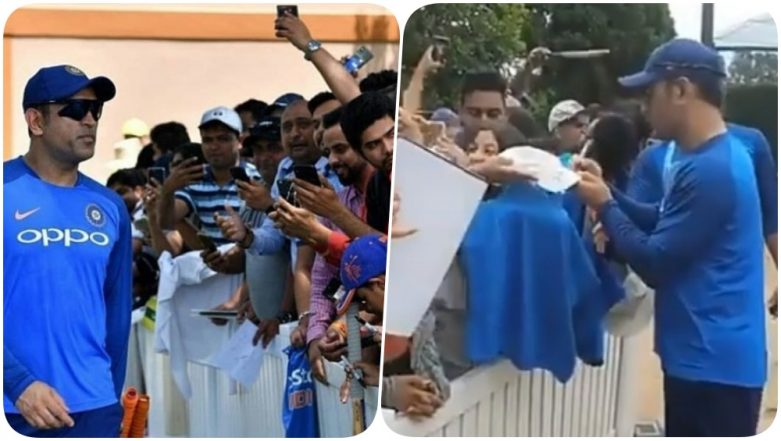 MS Dhoni has a huge fan base all over the world. The former Indian captain’s fan base ranges from children to elders and had no demographics. Now, Dhoni is currently in Australia for the upcoming ODI series and has been hitting the nets since the day he landed. MS, who was dropped from the squad for the T20I series for Australia, sweated it out in the nets along with his teammates.  Naturally, the fans were quite excited watching him in action and turned out in huge number to get the glimpse of their favourite cricketer. Virat Kohli, MS Dhoni & Others Hit Indoor Nets Due to Rains in Sydney Ahead of ODI Series (Watch Video).

The former Indian captain also did not disappoint them and went on to meet them. Dhoni also obliged them with autographs. The video of the same was shared by the BCCI on their social media handles. “MSD fever at the SCG post-practice. Humble as always, @msdhoni signed a few autographs for the fans who had gathered to watch #TeamIndia train before the 1st ODI #AUSvIND,” read the caption of the clip. MS Dhoni, Shikhar Dhawan, and Ambati Rayudu Sweat it Out in Nets Ahead of India vs Australia 1st ODI in Sydney: View Pictures.

MSD fever at the SCG post practice. Humble as always, @msdhoni signed a few autographs for the fans who had gathered to watch #TeamIndia train before the 1st ODI #AUSvIND pic.twitter.com/AoBsBf2WyF

The BCCI also shared the pictures of the team’s practice session.

#TeamIndia all set and raring to go. Bring on the ODIs #AUSvIND

The players of the team were seen chilling after practice.

After beating Australia in the Test series, Virat Kohli and men will play their first ODI match tomorrow in Sydney. The team is yet to declare the 12-man squad for the match as they are awaiting COA’s stand on Hardik Pandya and KL Rahul.