Dutch cricket team coach Ryan Campbell has been discharged from hospital and is expected to re-join the Netherlands team within the coming weeks. 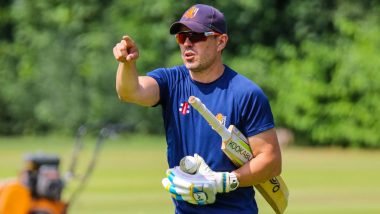 London, May 10: Dutch cricket team coach Ryan Campbell has been discharged from hospital and is expected to re-join the Netherlands team within the coming weeks. Campbell had suffered a cardiac arrest last month in London and was recently removed from an induced coma by doctors with no signs of any damage to the brain. Follow-up tests showed no damage to the heart and doctors have excluded the possibility of a heart attack as the cause of the cardiac arrest, ICC said on Tuesday. IPL 2022: Jasprit Bumrah’s Five-for, KL Rahul’s Batting Exploits Re-Ignite Hope of T20 World Cup Success.

On being discharged, Campbell paid tribute to the treatment he received from medical staff during his three weeks in the NHS Royal Stoke University Hospital. "I want to take this opportunity to thank the amazing doctors and nurses at the Royal Stoke Hospital critical care unit for their incredible professionalism, kindness and compassion. I also want to thank Beci Bassett, a parent at the adventure playground in Cheshire who immediately administered CPR. Her courage and quick intervention quite simply saved my life," he said.

"My wife Leontina was at my bedside hour after hour and kept our families informed of my progress. She dealt bravely with every development thrown her way. LT, I thank you and love you. "LT was joined early on by my great mate Simon Millington, who flew out from Nevada to be there for her and her family and assisted them throughout the ordeal. For this I will be eternally grateful. Jason Holder Rested As West Indies Announce Squad for ODI Tours of Netherlands, Pakistan.

"Finally, I want to say a big thank you to all my well-wishers from around the world. The amount of messages of love and support my family and I received was extremely humbling." It is now expected the 50-year-old will re-join the Netherlands camp ahead of their ICC Men's Cricket World Cup Super League three-match ODI series at home against the West Indies later this month. Campbell was appointed Netherlands coach in January 2017, and as a player represented both Australia and Hong Kong at the international level.

(The above story first appeared on LatestLY on May 10, 2022 11:47 AM IST. For more news and updates on politics, world, sports, entertainment and lifestyle, log on to our website latestly.com).