Not MS Dhoni or Sourav Gangly! Irfan Pathan Picks Rahul Dravid As a Captain He Would Give His Life For 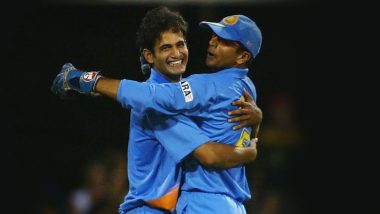 Former Indian all-rounder Irfan Pathan played under many different captains during the course of his career and enjoyed a fair bit of success under everyone. The left-arm pacer made his international debut under Ganguly while he was the part of MS Dhoni-led team which lifted the 2007 T20 World Cup and 2013 Champions Trophy. However, the southpaw made an interesting choice when being asked about to name a captain he would have given his life for. Pathan picked none another than India’s legendary batsman Rahul Dravid who led India between 2005 and 2007. Suresh Raina, Irfan Pathan Want BCCI to Allow Indian Players to Participate in Foreign T20 Leagues.

Pathan listed out Dravid’s achievements as the skipper of the side and said that Indian legend communicated with his players very well and used to define the role of every individual perfectly.

“It’s a tough pick but I would like to go with Rahul Dravid. Dada was my first captain, Dada backed me throughout. Anil Kumble could have led for a longer period, unfortunately, that did not happen. Achievement-wise, nobody can be compared to MS Dhoni. But I enjoyed thoroughly during Dravid’s captaincy, the reason being the communication about the role was very clear. He clearly defined my role as a captain. Dravid’s captaincy is not much talked about but there was a phase when we won 14-16 matches while chasing under his leadership which was also a world record then,” he said while talking to Sports Tak.

Hailed as ‘The Wall,’ Dravid is regarded as one of the best batsmen to have ever stepped onto the cricket field. However, his tenure at helm was pretty impressive too. He took over the reins of the side after Sourav Ganguly was dropped from the team in late 2005. Dravid captained India in a total of 25 Tests and 79 ODIs, winning eight and 42, respectively. Also, India defeated England and West Indies at their own backyard under Dravid.

Pathan also recalled how Dravid boosted up the team’s morale after India’s miserable campaign at the ICC Cricket World Cup 2007. “His communications skills were brilliant. I remember when we were knocked out of the World Cup, then I and MS Dhoni had gone to see a movie with Dravid. After the World Cup, we were quite upset for 2-3 days and did not feel like going anywhere, Dravid was also very upset. He then told us that he would take us out for a movie. While we were not in the mood, he knew we were the future of the Indian team and wanted to tell us something,” Irfan added.

(The above story first appeared on LatestLY on Jun 03, 2020 11:16 AM IST. For more news and updates on politics, world, sports, entertainment and lifestyle, log on to our website latestly.com).