Rohit Sharma Uses Cuss Word at Cheteshwar Pujara For Not Running a Single, But Ben Stokes Takes a Swipe at Virat Kohli, Here's Why (Watch Video) 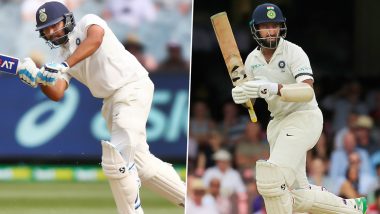 During the ongoing 1st Test match between India and South Africa, Rohit Sharma gestured Cheteshwar Pujara that there a possible run after the latter rejected to take a quick single. Sharma also used a cuss word for Pujara after he denied running a single. The incident happened during the 4th Day of India vs South Africa 1st Test. During the 26th over of India’s 2nd innings, Sharma played a shot near silly point. While he looked to grab a quick single, Pujara denied running. Later, Sharma gestured Pujara that there was a run there while using a cuss word. After the event, Ben Stokes also tweeted to take a swipe at Virat Kohli during the event. “This time it’s Rohit not Virat....if you know you know”, Stokes wrote on Twitter.

Sharma had decided to take a single on the shot and he started his run-up, however, Pujara rejected the call. Due to this, Sharma went back into the crease quickly. Have a look at the video below. Rohit Sharma and Mayank Agarwal's 317-Run Partnership For First Wicket During India vs South Africa 1st Test Match 2019 Smashes Several Records: Here's The List.

Sharma letting Pujara know there was a run there. pic.twitter.com/KWiT6JPDB2

Well, it looks like the Indian opener was eager to take a run there. Ben Stokes took a dig at Kohli as the Indian skipper has been seen using the same word during matches, and the word resembles Ben Stokes when someone lip-reads it. So Stokes took a dig saying that Rohit Sharma spelt his name this time and not Virat Kohli. India Vs South Africa, Live Cricket Score 1st Test Match.

This time it’s Rohit not Virat....if you know you know 😂

(The above story first appeared on LatestLY on Oct 05, 2019 02:58 PM IST. For more news and updates on politics, world, sports, entertainment and lifestyle, log on to our website latestly.com).