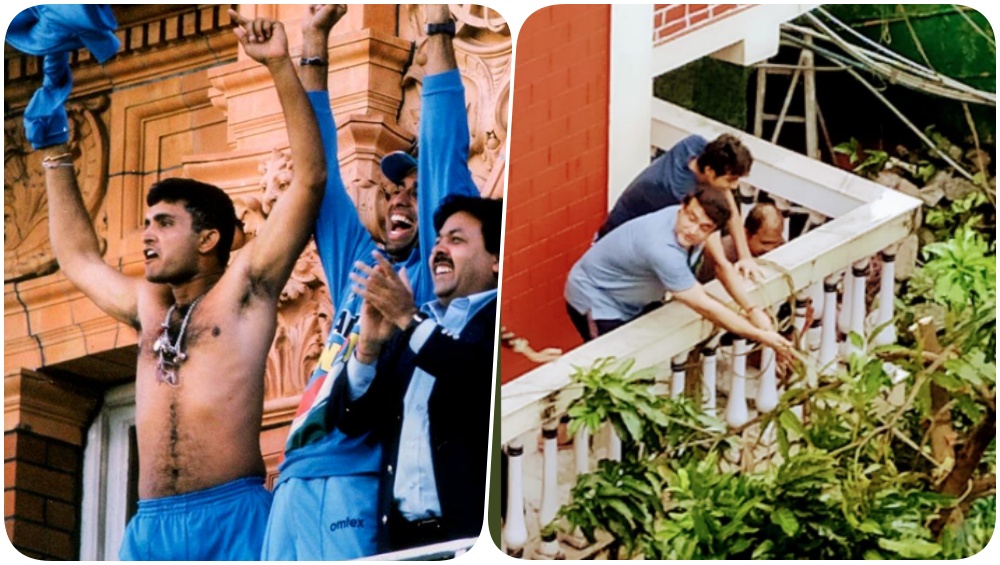 Sourav Ganguly yesterday out up pictures on social of himself saving a mango tree amid Amphan Cyclone. Ganguly was in is balcony while making attempts to fix the tree and the and also hailed for showcasing another display of 'strength at its highest'. No sooner he put up those snaps, the netizens quickly found parallels between his show in the balcony during 2002 NatWest final and the current snaps. The netizens posted tweets making a quick comparison between the two situations. The menace of coronavirus has already brought the world to a grinding halt and Amphan Cyclone added to the woes of the people in West Bengal and Odisha. Mohammad Kaif Hilariously Trolls Nasser Hussain Years After 2002 Natwest Final Win, Says ‘Bus Driver Drives Convertible Now’.

Several trees were uprooted and the thus even Kolkata was not untouched with the same. Obviously Sourav Ganguly’s house in Bihala had to bear the brunt and thus this mango trees also fell off from its place. The current BCCI Chief posted the pictures of himself and a couple of others saving the tree. He posted the snaps with the caption, “The mango tree in the house had to be lifted, pulled back and fixed again .. strength at its highest 😂😂.” Check out the tweet by Ganguly below and then the reactions by the netizens

The mango tree in the house had to be lifted, pulled back and fixed again .. strength at its highest 😂😂 pic.twitter.com/RGOJeaqFx1

Dada and balcony a better love story than veer Zara

On a more serious note, stay safe everyone.🙏 pic.twitter.com/G6wPKHKHkn

After fixing the mango tree

Also, you after fixing the mango tree. pic.twitter.com/ShpQbUkazv

Talking about the NatWest Trophy 2002 final match, the game is still remembered by fans as one of the finest contests held at the Lord's Cricket Stadium between India and England. It was Mohammad Kaif and Yuvraj Singh who snatched the win from the jaws of defeat as the Men in Blue chased a total of 325 runs on the board. The game is said to have changed the face of Indian cricket and has also been famous for Ganguly's shirtless celebration.