Sourav Ganguly Recalls How MS Dhoni Handed Him Captaincy During His Farewell Test in 2008, Says ‘I Didn’t Expect It’ 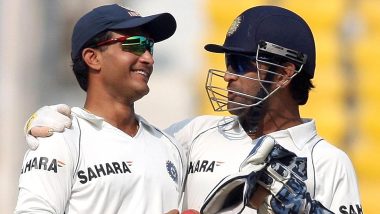 Former Indian captain and current BCCI President Sourav Ganguly went down memory lane and remembered his farewell Test. The southpaw made his last appearance in whites in 2008 India vs Australia Test in Nagpur. Ganguly made 85 runs in the first innings of the match. However, the game is remembered for MS Dhoni’s gesture towards the southpaw. In the final day of the game, Dhoni gave the captaincy to Ganguly and the fans witnessed the legendary cricketer leading India for the one last time. In a recent interaction, Ganguly shedded lights on the incident and said he’s wasn’t expecting it. Sourav Ganguly Sheds Light on His Sacking From Indian Cricket Team.

Ganguly was speaking to India batsman Mayank Agarwal in the latest episode of the latter’s chat show ‘Open Nets with Mayank.’ In one of the segments, Mayank showed some photos of Ganguly from his playing days and asked him to recognize to identify where the pictures were taken. The former Indian captain easily recognized the picture in which he was given the guard of honour. Sourav Ganguly Reveals Why Sachin Tendulkar Never Took Strike on First Ball.

“My last Test match in Nagpur. It was the last day, last session. I was walking down the steps at the Vidarbha Stadium. They (teammates) stood beside me and allowed me to enter the ground,” Ganguly said. Mayank went on to ask him about Dhoni’s heart-warming gesture during to final stages of the game. In reply, Ganguly claimed that he’s wasn’t expecting the gesture from the then India captain.

“That (handing over captaincy) was a bit of a surprise. I didn’t expect it. But MS Dhoni being MS Dhoni, he is full of surprises like his captaincy. We were winning the Test match and my mind was on retirement. I don’t know what I did for those 3, 4 overs,” Ganguly said.

Ganguly was seen changing the fields and taking other important decisions as the Mohali stadium erupted in joy. India went on to win the game by 85 runs as Ganguly ended his career on a high.

(The above story first appeared on LatestLY on Jul 11, 2020 03:57 PM IST. For more news and updates on politics, world, sports, entertainment and lifestyle, log on to our website latestly.com).