This Day That Year: MS Dhoni Became the Only Captain to Win All Three ICC Trophies As India Won Champions Trophy in 2013 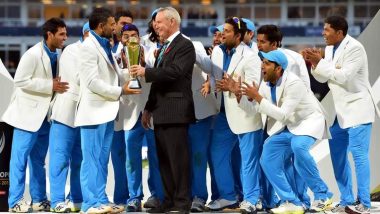 On June 23, 2013, India lifted ICC Champions Trophy under the captaincy of MS Dhoni. The Men in Blue defeated hosts England in the final in a rain-curtailed match. The match was reduced to 20 overs per side. And India while defending won the match by five runs. After the win, Dhoni became the first captain, and only till date, to win all three ICC trophies. Before winning Champions Trophy in 2013, in 2007, India under Dhoni won World T20 and in 2011 World Cup at home. MS Dhoni Should Be Credited for Supporting Virat Kohli After Disastrous 2014 England Tour: Gautam Gambhir.

England's response began on a shaky note after Umesh Yadav dismissed Alastair Cook. India kept picking wickets at regular intervals and restricted England to 46 for four. Eoin Morgan and Ravi Bopara added 64 runs for the fifth wicket and took England near the target.

It's been 7 years now since this iconic night, India defeated England in the finals of ICC Champions Trophy 2013. pic.twitter.com/3bcqHXe3mX

Ishant Sharma then provided team India with the valuable breakthroughs as he removed Morgan and Bopara. Jadeja accounted for Jos Buttler and that left England for 112 for seven. Jadeja was awarded Man of the Match and Dhawan was named Player of the Series.

(The above story first appeared on LatestLY on Jun 23, 2020 10:05 AM IST. For more news and updates on politics, world, sports, entertainment and lifestyle, log on to our website latestly.com).