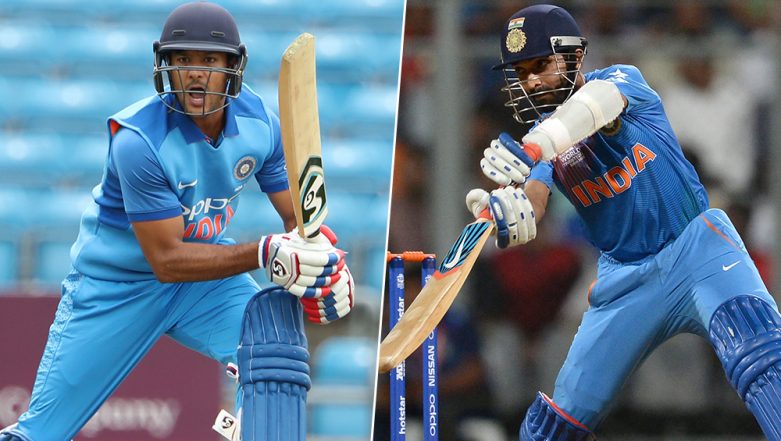 Vijay Shankar is ruled out of the tournament due to a toe injury he suffered while facing Jasprit Bumrah in nets. Mayank Agarwal has been named as the replacement for the all-rounder. Mayank Agarwal had a good run in the domestic circuit but hasn't yet played a single limited over-game for team India. Mayank's name in the squad has surprised one and all as there were many experienced batsmen in the contention for the vacant spot. Vijay Shankar Out of ICC Cricket World Cup 2019, Mayank Agarwal Set to Join Team India in England.

Twitterati were also not impressed by Mayank's selection and slammed BCCI for ignoring Ajinkya Rahane who has a fair amount of international experience and is currently performing decently for Hampshire in county cricket. The 31- year old has a good record in England and has also scored a century on his county debut. It was England where Rahane scored his first ODI ton. So, he could have been an asset for the squad. The Indian Cricket fans used social media as a medium to showcase their anger and lashed out at BCCI. Here are some reactions of the Indian fans after Mayank Agarwal's selection. Vijay Shankar Ruled Out of ICC CWC 2019 Due to Injury, Mayank Agarwal to Replace Him; Twitter Reacts

Still no place for #ajinkyarahane , why is he not getting picked in #TeamIndiahttps://t.co/v00AVbyzqu

Rahane in the opening slot!!

Why don't we get #AjinkyaRahane in this Team in place of Mayank Agarwal to replace Vijay Shankar. KL Rahul is struggling as opener. So Rohit - Jinx can open the Innings. Jinx' Experience of playing in English Conditions and his fielding skills might be useful as well @BCCI

Someone needs an answer!!

@imVkohli @BCCI #TeamIndia Why was #ajinkyarahane not considered for No.4 ? Please answer . @RaviShastriOfc @StarSportsIndia

Rahane's experience could have been the key

#VijayShankar ruled out of #cwc19 and #MayankAgarwal named as a replacement

But why not #Ajinkyarahane? He brings the much needed stability in the middle order and most importantly a proven batsman in England pitches.. He's in good form too@BCCI@SriniMaama16

So, these were some reactions of the fans on Twitter who wanted Ajinkya Rahane ahead of Mayank Agarwal. The right-hander was part of team India in the 2015 World Cup in Australia. He batted at number four throughout the tournament and performed quite decently. Mayank is purely an opener while India's Test vice-captain has played in many different positions in the past and could have been the answer for India's unsettled middle-order. Nevertheless, despite a lost against England, India are comfortably sitting in the second position and are just one win away from a place in the semi-finals. The Men in Blue will take on Bangladesh at Birmingham and would like to seal the semi-final spot.