Apart from scoring his third half-century consecutively in the World Cup 2019, Virat Kohli was also in the news for arguing with the umpire Aleem Dar during India vs Afghanistan, CWC 2019 tie. 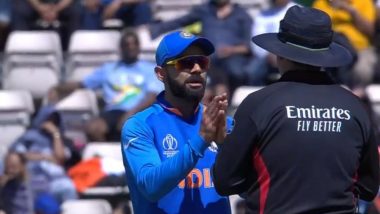 Apart from scoring his third half-century consecutively in the World Cup 2019, Virat Kohli was also in the news for arguing with the umpire Aleem Dar during India vs Afghanistan, CWC 2019 tie. The skipper’s reaction went viral as he spoke to Aleem Dar and the netizens posted hilarious memes which went viral on the Internet. So here’s what happened. After India posted a total of 225 runs on the board and we had Hazratullah Zazai was handling the batting duties for Afghanistan. India vs Afghanistan Live Cricket Score.

Zazai missed a slight edge and it looked like the bowler had pitched in line. The Indian players appealed for an LBW but were turned down by the umpire. Virat Kohli and men went for a DRS which didn’t go in the way of the Men in Blue. This surely did not go down well with the Indian cricket captain and he was seen arguing with the umpire. Virat Kohli Equals Mohammad Azharuddin’s Record As he Scores Third Consecutive Fifty During IND vs AFG CWC 2019 Match.

While speaking to the umpires, he was seen folding his hands and this reaction became a viral meme. The memes were shared on social media by netizens.

@imVkohli requesting umpires to help to win this match pic.twitter.com/cVCTDtDObG

Give a funny, irreverent caption for this picture. No abuses, please... #CWC19 #INDvAFG pic.twitter.com/FH2ncE0yWo

Indian batting in front of Pakistan

Me on the last day or exam vs me on the result day #INDvAFG #CWC19 pic.twitter.com/c7pQxRh8VO

Virat Kohli today scored his third half-century in the game and thus equalled the record of Mohammed Azharuddin. India posted a total of 225 runs on the board and as of now, Afghanistan has lost four wickets.

(The above story first appeared on LatestLY on Jun 22, 2019 09:45 PM IST. For more news and updates on politics, world, sports, entertainment and lifestyle, log on to our website latestly.com).