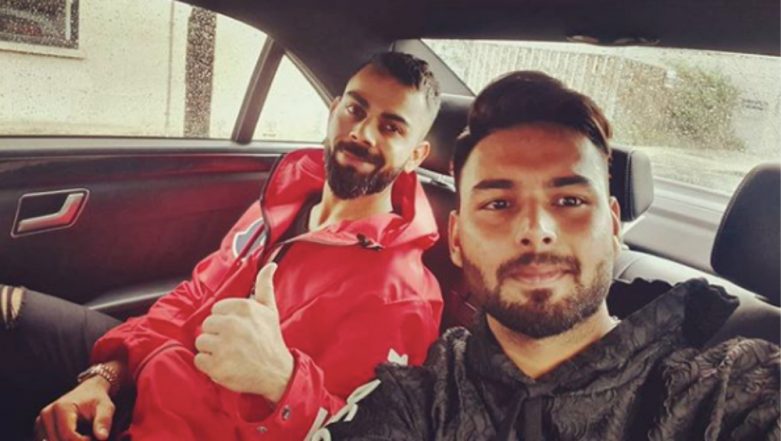 Rishabh Pant has joined the Indian cricket team which is currently taking part in the ongoing ICC Cricket World Cup 2019 (CWC 2019). The wicketkeeper-batsman was not initially picked for the mega tournament. However, following Shikhar Dhawan’s injury, the youngster was added as a cover. Now that, Dhawan has been ruled out of the World Cup, Pant has been named as his replacement. ICC Cricket World Cup 2019: Jasprit Bumrah Reveals Vijay Shankar Has No Injury Concern.

The left-handed batsman was seen touring around the Southampton, the venue for India’s next match, with the skipper Virat Kohli. The Indian cricket team captain took to Instagram and shared a selfie clicked by Pant, featuring Kohli as well. In the caption of the post, Kohli wrote, “Southampton diaries with this champ.” Vijay Shankar Injured! Twitterati Comes Up With Funny Allegation of '3D Black Magic' by Ambati Rayudu and Rishabh Pant.

Southampton diaries with this champ. 😎👍

Dhawan was hit on the thumb during the match against Australia. Against Pakistan, all-rounder Vijay Shankar replaced injured Dhawan in the playing XI. India’s next match is against Afghanistan side and ahead of the match the Men in Blue witness another injury concern as Shankar was hit in the nets session by a Jasprit Bumrah yorker.

If Shankar fails to recover fully on time, Pant is expected to bat at number four against Afghanistan. The wicketkeeper-batsman is known for his aggressive style of play and who knows his aggression might actually help India in the middle overs.