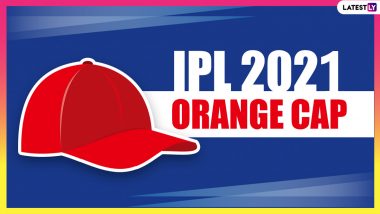 Ruturaj Gaikwad overtook KL Rahul to become the new Orange Cap holder after scoring 32 runs off just 27 balls against Kolkata Knight Riders in the IPL 2021 final on Friday, October 15. With the knock in the finals, he has now scored 635 runs in 16 matches and became the youngest in IPL history to do so. His CSK opening teammate Faf du Plessis ended with just 633 runs, only three short of topping the Orange Cap charts. KL Rahul is third on the list 626 runs. IPL 2021 Purple Cap Holder List.

Indian Premier League season 14 kicked off on April 09 but was suspended on May 04 after coronavirus cases broke out in various teams. BCCI had to postpone the remaining games and finally the T20 league resumed on September 19 but in the UAE. After the end of first round matches, the IPL 2021 playoffs will begin on October 10.  IPL 2021 Points Table Updated.

Mumbai Indians are the defending champions as well as the most successful team in the history of the competition with five titles, including consecutive title wins in 2019 and 2020. Chennai Super Kings are the second most successful team with three titles while Kolkata Knight Riders have won the title twice. Rajasthan Royals and Sunrisers Hyderabad and the defunct Deccan Chargers have won the trophy once each.

(The above story first appeared on LatestLY on Sep 23, 2021 02:56 PM IST. For more news and updates on politics, world, sports, entertainment and lifestyle, log on to our website latestly.com).