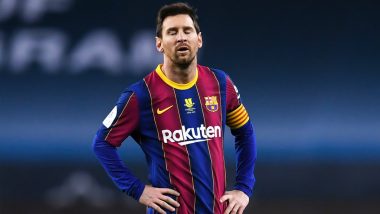 Lionel Messi is a free agent for now. His contract with Barcelona came to an end earlier this June. Messi's contract is currently being worked on as informed by Joan Laporta. The Argentine was also seen at Barcelona airport. Now, as the contract is being worked on, Angel Torres has said that Barcelona and La Liga should not allow Messi to leave this season. According to him, leaving Messi would be quite a big error that would be committed by La Liga and Barcelona. The two would regret it later. Lionel Messi Returns To Barcelona After A Holiday With his Family, New Contract for Argentine Could Be Announced Soon (Watch Video).

"The best footballer in the world has to retire in Spain complying with the rules of economic control. I think LaLiga will be a bit flexible after the bad year in which Spanish football has lost 1,000 million euros due to Covid," Angel Torres, said. The Getafe president further said that he would do anything for Messi to stay back at La Liga.  He further opined that footballers like Messi should retire at La Liga. The Argentine has been with Barcelona since his childhood.

According to reports, Catalans might announce Messi's contract in the next few days ahead of Barcelona vs Juventus. It is widely reported that Messi has accepted a 50 per cent pay cut after La Liga President Javier Tabas had said that they would not bend rules to accommodate the Argentine. Barcelona have signed Sergio Aguero, Eric Garcia and Memphis Depay so far this summer.

(The above story first appeared on LatestLY on Jul 29, 2021 11:44 AM IST. For more news and updates on politics, world, sports, entertainment and lifestyle, log on to our website latestly.com).