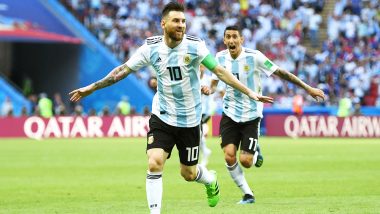 New Delhi, December 4: The draw for next year's Copa America has been announced in which Australia and Qatar have been added. CONMEBOL, South America's football governing body, announced the draw on Tuesday for the tournament which will be co-hosted by Argentina and Colombia.

Argentina will play the tournament opener against Chile in Buenos Aires on June 12 next year. The tournament will have 38 matches and after a little more than a month of competitions, the title will be defined in Barranquilla. Australia, Qatar Invited to Take Part in Copa America 2020.

Australia have been drawn in Group A alongside Argentina, Bolivia, Uruguay, Chile and Paraguay. While, Qatar have been placed in Group B with Colombia, Brazil, Venezuela, Ecuador and Peru.

"We had to do something innovative with the Copa América to not only generate more income for the associations, but better competition so that we can reach the World Cups with more strength and think big to bring the World Cup back to South America," said CONMEBOL President Alejandro Dominguez. British Football Fan Arrested in UAE for Wearing Qatar Jersey During AFC Asian Cup 2019 Match.

Brazil will enter the next year's tournament as the defending Champions after defeating Peru 3-1 in the final earlier this year. After 2020, the tournament is set to be held every four years with the next edition scheduled for 2024.

(The above story first appeared on LatestLY on Dec 04, 2019 12:13 PM IST. For more news and updates on politics, world, sports, entertainment and lifestyle, log on to our website latestly.com).