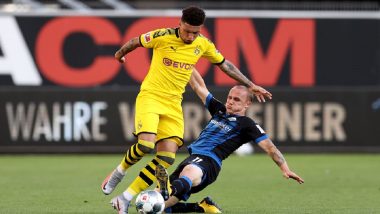 Berlin, June 1: Jadon Sancho scored a second-half hat-trick as Borussia Dortmund recovered from last week's defeat to leaders Bayern Munich and returned to winning ways following a comfortable 6-1 win over bottom side Paderborn. In the 29th round of the Bundesliga on Sunday, Paderborn frustrated Dortmund for large periods in the first half, whilst creating a couple of presentable scoring chances through Christopher Antwi-Adjei, who dragged wide either side of BVB's best work, according to the official Bundesliga website.

Thorgan Hazard forced Leopold Zingerle into a smart save with Dortmund's first opening of note, before Raphael Guerreiro went close with a fierce strike that was headed for the bottom corner before a Paderborn defender intervened to direct it wide. Emre Can sent a header past the post and drove over as Lucien Favre's side went in at the break level and with plenty of food for thought. Emre Can Scores Worldie on Borussia Dortmund Debut, Nets Brilliant Goal Against Former Club Bayer Leverkusen (Watch Video).

Gerrit Holtmann flashed an inviting ball across goal soon after the restart, but neither Antwi-Adjei nor Dennis Srbeny could apply the finishing touch. It was the wake-up call Dortmund needed as Achraf Hakimi brought the best out of Zingerle and Hazard clipped an effort wide before meeting Guerreiro's low ball to break the deadlock.

Sancho slotted in another simple effort from Julian Brandt's inch-perfect cross, but Paderborn refused to throw in the towel. Srebeny had an effort ruled out for offside and former Dortmund defender Uwe Hunemeier reduced the arrears from the penalty spot, only for Sancho to fire in from 18 yards and Hakimi to add a fourth.

After US teenager Gio Reyna went within a whisker of a maiden Bundesliga goal, fellow substitute Marcel Schmelzer turned in Axel Witsel's cross, with Sancho completing his hat-trick from close range in added time. Elsewhere, Borussia Monchengladbach inflicted Union Berlin with their 16th defeat of the season after Marcus Thuram netted a brace in the 4-1 win.

(The above story first appeared on LatestLY on Jun 01, 2020 10:43 AM IST. For more news and updates on politics, world, sports, entertainment and lifestyle, log on to our website latestly.com).