FIFA All Set to Cancel ‘The Best’ Awards for 2020 Amid Coronavirus Pandemic: Report 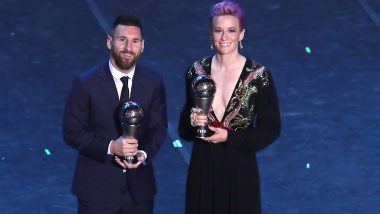 FIFA are all set to cancel its annual ‘The Best’ awards for the year of 2020 due to the current coronavirus pandemic. The ceremony was scheduled to take place in Milan in September and owing to the ongoing situation in the entire world, it has been called off according to reports. Lionel Messi was elected as the best men’s player in the world last year while USA’s Megan Rapinoe took home the women’s best player honours. FIFA U-17 Women's World Cup 2021 to Take Place from February 17 to March 7.

Due to the coronavirus pandemic, current footballing season has been brought to a standstill as several competitions across the world has been either cancelled or suspended until further notice. And with no regular football action to judge the players on, FIFA is likely to discard this year’s ‘The Best’ awards according to a report from Spanish outlet Marca. Netflix Developing a Film on the United States' 1999 FIFA Women's World Cup Win.

Another reason for the cancellation of the awards is said to be that FIFA president Gianni Infantino believed that an evening of celebration during this pandemic wasn’t the right thing to do.

The news outlet also reported that France Football are yet to make a decision on whether to award the Ballon d’Or this season or not. The award for the best player in the world as voted by several journalists has been held every year since 1956.

Meanwhile, UEFA are still unclear on the state of their annual awards as the current season has been put on hold for the time being due to the pandemic. However. The 2019-20 campaign is expected to restart in August, with the competition being played at a neutral venue and completed in 2-3 weeks time.

(The above story first appeared on LatestLY on May 13, 2020 04:16 PM IST. For more news and updates on politics, world, sports, entertainment and lifestyle, log on to our website latestly.com).