The Germany Olympics football team were playing this match as part of its' preparations for the Tokyo Olympics, which begins next week. The incident took place with the scoreline tied 1-1. 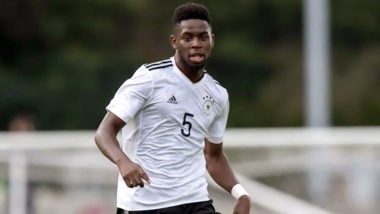 The Germany Olympics football team reportedly walked off the field bringing their friendly match against Honduras to an unexpected end on Saturday after one of their players was racially abused. Jordan Torunarigha, the player from Germany was allegedly racially abused by one Honduras player during the friendly match. The Germany Olympics football team were playing this match as part of its' preparations for the Tokyo Olympics, which begins next week. The incident took place with the scoreline tied 1-1. According to a tweet by the Germany Olympics football, the players decided to leave the pitch with five minutes remaining for play to end because Torunarigha was subject to racist abuse. Also, the match was being held behind closed doors. Bukayo Saka Slams Social Media Platforms in a Powerful Letter, Feels That They Are Not Doing Enough to Stop Racism

ℹ️ The game has ended 5 minutes early with the score at 1-1. The Germany players left the pitch after Jordan Torunarigha was racially abused.#WirfuerD#Tokyo2020pic.twitter.com/D85Q63Ynr9

Germany coach Stefan Kuntz explained the incident and stated that it was a collective decision on their part to leave the pitch. " In terms of the game, it was very high level. In the third period I was wondering what was going on with Jordan. Five minutes before the end of the game there was a scuffle. I ran to Jordan because I saw his gestures. He was getting terribly upset. He said that he had been racially insulted for the second time. We decided to leave the pitch because it was against our values."

He also confirmed that the Honduras players came up to his side and apologised for their behaviour. "The whole Honduras squad came over to the bench and apologised. That ended the issue for us and Jordan. His (Torunarigha's) team-mates picked him up straight away, gave him a hug for the first few minutes. He was very upset. But you could tell that he was happy to be with us. At the end, we even joked a bit again," he added.

The Honduras national team on Twitter stated that it was a result of a misunderstanding. They wrote, "Game ended at 87 [minutes] by abandonment due to the fact that a German player alleged an alleged racist insult on the part of the Honduran national team. On the subject, the Seleccion Nacional de Honduras expresses that the situation was the result of a misunderstanding on the pitch."

This however wasn't the first time Torunarigha has been a victim of racial abuse. The 23-year old, who plays for Hertha Berlin in the Bundesliga was subjected to racial abuse earlier during his team's match against Schalke in the DFB-Pokal trophy. Schalke was thus fined  €50,000 after this by  the DFB. Racism has been a growing menace in football with England stars Marcus Rashford, Jadon Sancho and Bukayo Saka being at the receiving end of a lot of abuse after they missed penalties in England's Euro 2020 final defeat against Italy.

(The above story first appeared on LatestLY on Jul 17, 2021 07:48 PM IST. For more news and updates on politics, world, sports, entertainment and lifestyle, log on to our website latestly.com).