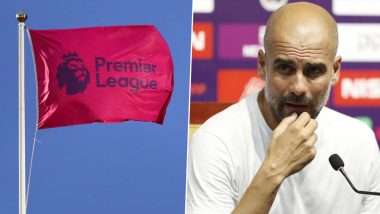 Manchester City got their two-year European ban overturned on Monday (July 13, 2020) after CAS verdict. The Premier League club were found guilty by UEFA of overstating sponsorship revenue in the information submitted to the governing body between 2012 and 2016 but the Court of Arbitration for Sport ruled otherwise. However, things are not done and dusted for the former EPL champions as Premier League are still continuing their investigation. Manchester City Two-Year Ban Lifted by CAS, Eligible to Play in UEFA Champions League 2020–21.

In February, UEFA banned Manchester City for two years from European competitions and fined them £27 million, but after the ruling on Monday, the suspension was overturned and the fine was reduced to just £9 million. This means Pep Guardiola’s men are now eligible to play in the Champions League next season. Manchester City Ban Lifted: Which Teams From EPL Will Qualify for Champions League and Europa League Next Season?

With the ruling in their favour, City will be able to plan much better for next season and will be able to sign some new players as well as keep hold of their current superstars. However, everything is not smooth sailing yet for the Manchester side as they wait for Premier League response as their investigation continues.

According to Daily Mail, City will have to tackle the Premier League if they launch probe over the club for any wrongdoing. It is understood that the league is looking into the recruitment of academy players and third-party ownership, as well as FFP.

As per the publication, The Premier League declined to comment on their investigation when approached on Monday. However, it is expected that the league’s stance on Manchester City’s finances may change after the recent CAS hearing.

(The above story first appeared on LatestLY on Jul 14, 2020 05:32 PM IST. For more news and updates on politics, world, sports, entertainment and lifestyle, log on to our website latestly.com).