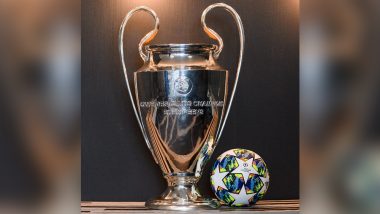 Manchester United have been placed alongside Ajax in Pot Two of UEFA Champions League 2020-21 for the group stage draw. Premier League champions Liverpool are in Pot One of the draw alongside league winners from five other leagues while Champions League and Europa League winners Bayern Munich and Sevilla have also been placed in Pot One of the draw. United and Manchester City are in the same pot and won’t face each other before the quarter-finals. Pot 3 and Pot 4 will be announced when the final six places are decided for the 32-team UCL group stage by the end of this month. Serie A 2020–21 Season Preview: Will Juventus Clinch a Record 10th Successive Scudetto or Will a New Champion Emerge in Italy?

The UEFA Champions League 2020-21 group stage draw will take place on October 1. Pot 1 and Pot 2 for the draw have already been announced while the other two seedings will be announced post the UCL playoffs. The top-seeded pot consists of UEFA Champions and Europa League winners as well as champions of Europe’s top six leagues excluding the Bundesliga. Bayern Munich, who also won the Bundesliga, have been placed in the top pot as a UCL winner.

Real Madrid, Liverpool, Juventus, Paris Saint-Germain, Zenit St. Petersburg and Porto are placed in the top pot while Barcelona, Atletico Madrid, Manchester City, Manchester United, Shakhtar Donetsk, Borussia Dortmund, Chelsea and Ajax are in the second pot. Teams are allocated to the other three pots based on their UEFA rankings, which is determined by the results in UCL and Europa League over the last five years.

(The above story first appeared on LatestLY on Sep 16, 2020 09:58 PM IST. For more news and updates on politics, world, sports, entertainment and lifestyle, log on to our website latestly.com).