The 21-time Grand Slam winner Novak Djokovic remains out of contention for the US Open unless there is some substantial change before the tournament starts at the end of August. 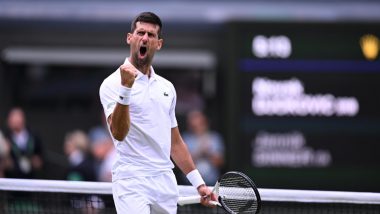 New York, July 21: The 21-time Grand Slam winner Novak Djokovic remains out of contention for the US Open unless there is some substantial change before the tournament starts at the end of August. The Serbian will not be able to play in the Grand Slam because the organisers of the tournament have once again insisted that they will respect the US government's Covid protocols. However, almost 12,000 people around the world have now signed an online petition calling for the United States Tennis Association (USTA) to work with the country's government to allow Djokovic to compete in the US Open despite his refusal to take the Covid-19 vaccine. Novak Djokovic Hoping for ‘Positive News’ About US Open and Australian Open Participation.

The 35-year-old - a three-time champion at Flushing Meadows - was named on the entry list for the final Grand Slam of the year on Wednesday, but that is routine, rather than an indication that he will be allowed to play. "There is absolutely no reason at this stage of the pandemic to not allow Djokovic to play at the US Open 2022," said the change.org petition, which was launched on June 21. "(The) US Government and USTA must work together to allow him to play ... MAKE IT HAPPEN, USTA!" Novak Djokovic Declared Honorary Citizen of Visoko.

Djokovic's stance already cost him the chance to compete in the Australian Open earlier this year and it looks likely to do so again. The Serb, who retained his Wimbledon crown with a win over Australia's Nick Kyrgios earlier this month, in February said he was prepared to miss Grand Slam tournaments rather than take the Covid-19 vaccine. The main draw at the US Open begins on August 29.

(The above story first appeared on LatestLY on Jul 21, 2022 08:04 PM IST. For more news and updates on politics, world, sports, entertainment and lifestyle, log on to our website latestly.com).