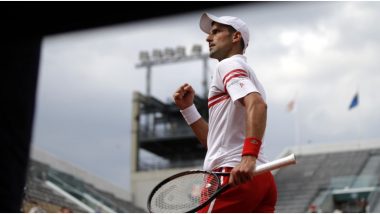 World no 1 Novak Djokovic would aim at continuing with his dominating form when he takes on Lorenzo Mussetti in the fourth round of the French Open on Monday. That match would be played on June 7, Monday at the Philippe-Chatrier court. The Serbian star earlier, blew off his challenges in the first three rounds of this competition, without dropping a single set and would look to repeat that form once again. Djokovic, who ended as the runner-up last year, would be aiming at his 19th Grand Slam title. Sports News | French Open: She's Powerful, but I Was Ready, Says Rybakina After Defeating Serena

He had won the Australian Open earlier this year and would be a tough opponent to beat for Mussetti, who would be aiming at his first Grand Slam quarter-final. The Italian youngster showed up with good performances in the Mexico Open and Lyon Open, where he secured a quarter-final berth.

What is the Date, Time, Schedule and Venue of the French Open 2021 Novak Djokovic vs Lorenzo Mussetti Men's Singles Match?

The match would be played at the Philippe-Chatrier Court and it will start at 4:45 PM IST (Indian Standard Time).

Where to Watch the Live Telecast Novak Djokovic vs Lorenzo Mussetti Men's Singles Match of French Open 2021? Which TV Channel Will Broadcast it LIVE in India?

Where to Watch the Live Streaming of French Open 2021 Novak Djokovic vs Lorenzo Mussetti Men's Singles Match Online in India?

Novak Djokovic vs Lorenzo Mussetti Men's Singles live streaming will be available online. Fans can log on to Hotstar+ Disney and Tennis TV to catch French Open 2021 live streaming online and will have to pay a subscription fee.

(The above story first appeared on LatestLY on Jun 07, 2021 04:44 PM IST. For more news and updates on politics, world, sports, entertainment and lifestyle, log on to our website latestly.com).