Rafael Nadal vs Daniil Medvedev Head-to-Head Record: Take a Look at Who Dominates This Epic Rivalry Ahead of Their Australian Open 2022 Men’s Singles Final Match 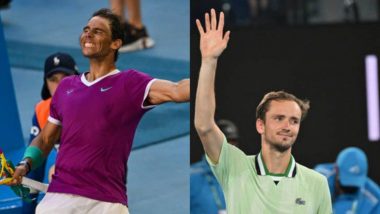 The final match for the Australian Open 2022 is here. The match will begin at 02.00 pm and the summit clash will be played between Rafael Nadal and Russia's Daniil Medvedev.  Nadal is just a win away from sealing his 21st Grand Slam win. Needless to say, the fans are looking out for the head-to-head record for both players. This is the fifth time that the two stalwarts are having a face-off with each other. The Spaniard has a whopping 3-1 record over Medvedev. Now, let's have a look at the head-to-head record. Rafael Nadal vs Daniil Medvedev, Australian Open 2022 Free Live Streaming Online: How To Watch Live TV Telecast of Aus Open Men’s Singles Final Tennis Match?

This contest was held in 2019 during ATP Masters 1000 Canada finals which was an outdoor hard court. The Spaniard walked away with an easy win over the Russian Tennis ace. He won the match 6-3,6-0.

(The above story first appeared on LatestLY on Jan 30, 2022 01:53 PM IST. For more news and updates on politics, world, sports, entertainment and lifestyle, log on to our website latestly.com).