Two-time Wimbledon champion Andy Murray defended the use of the underarm serve during his first-round win over Australia's James Duckworth at Wimbledon. 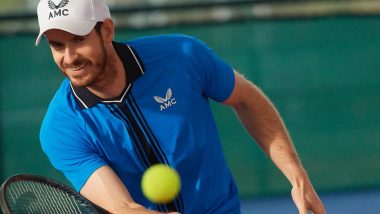 London, June 28 : Two-time Wimbledon champion Andy Murray defended the use of the underarm serve during his first-round win over Australia's James Duckworth at Wimbledon. After a slow start on Centre Court, Murray rallied past Duckworth 4-6, 6-3, 6-2, 6-4 to advance to the second round on Monday. The Scot will next play 20th seed John Isner, against whom he has an 8-0 ATP head-to-head record. The 35-year-old Murray used the underarm serve in the third set of his victory over Duckworth, winning the point as the Australian was left scrambling to get the ball back over the net. Wimbledon 2022: Emma Raducanu Victorious on Home Court, No 2 Seed Anett Kontaveit Wins Opener.

After the match, Murray suggested the underarm serve might become more popular as players retreat further behind the baseline to improve their chances of getting a decent return on big serves. "He changed his return position, that's why I did it," Murray explained. "He was struggling a little bit on the first-serve return, so he stepped probably two metres further back. As soon as I saw him step further back, I threw the underarm serve in," Murray was quoted as saying by metro.co.uk Just like the mode of dismissal earlier known as "Mankading" in cricket, the underarm serve in tennis is considered against the spirit of the game by many people.

The tactic is controversial but Murray insists underarm is not underhand. "I personally have no issue with players using it. I never have (any issues)," he added. "Certainly more and more players have started returning from further behind the baseline now to give themselves the advantage to return," he said. "No one says it's disrespectful for someone to return from five or six metres behind the baseline to try to get an advantage." Wimbledon 2022: Carlos Alcaraz Defeats Jan-Lennard Struff To Advance into Next Round.

The Scot hit 15 aces and won 85 percent of his first-serve points in his two-hour, 43-minute win, but also showed his variety in cat-and-mouse points, even throwing in an underarm serve. "I thought I did well to rebound after the first set. He likes playing on the grass. He's come back from a hip surgery himself in January and was playing very well," Murray said. "Once I started to find my returns a little bit more as the match went on, I felt a bit more comfortable. Did well to get through it."

(The above story first appeared on LatestLY on Jun 28, 2022 05:37 PM IST. For more news and updates on politics, world, sports, entertainment and lifestyle, log on to our website latestly.com).