Emma Raducanu, who captured everyone's imagination with a fourth-round run as a wildcard ranked outside the Top 300 here last year, made a triumphant return at Wimbledon on Monday, beating Belgium's Alison van Uytvanck. 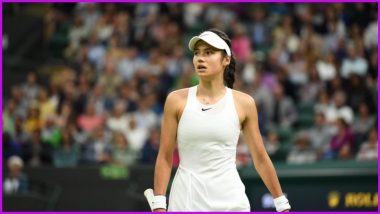 London, June 27 : Emma Raducanu, who captured everyone's imagination with a fourth-round run as a wildcard ranked outside the Top 300 here last year, made a triumphant return at Wimbledon on Monday, beating Belgium's Alison van Uytvanck. Back among the Top 10 on Monday, Raducanu got the better of the dangerous unseeded Alison van Uytvanck 6-4, 6-4. Van Uytvanck arrived at the All-England Club tied for the best record on the grass at all levels this summer with Beatriz Haddad Maia -- she went 12-2 in four events before Wimbledon, winning the titles at the ITF W100 in Surbiton and the WTA 125 in Gaiba, Italy. She also came into the match knowing what it takes to upset a big name at the All-England Club -- having knocked out then-defending champion Garbie Muguruza in a run to the fourth round in 2018. Novak Djokovic Reacts After his Winning Start to Wimbledon 2022 Campaign.

Raducanu, by contrast, had spent little more than 30 minutes of competitive match play on the surface, as she was forced to retire from her opening round match in Nottingham with a rib injury. But Raducanu was certainly at her best in her Centre Court debut over 1 hour and 41 minutes. She didn't have it her way against the World No.46, though and trailed 3-1 in the second set before finishing off a 6-4, 6-4 win. It was her first straight-set win at a major since her US Open championship triumph in September. "It's an incredibly special feeling to be back," she was quoted as saying in a report on the official website. "I felt the support the minute I walked out. I want to say thank you to everyone who has supported me through the last year including the tough times.

"It's all worth it to come through with a win. I know Alison's an extremely tricky opponent. On grass where the ball stays so low it's tricky to neutralise her great serve - she hits the ball really hard. I'm extremely pleased and looking forward to coming out in front of you guys again." In another match, Anett Kontaveit, the No.2 seed, reached the second round of the Ladies' Singles with a convincing victory over Bernarda Pera of the United States. The Estonian No.2 seed won 7-5, 6-1 in an hour and 21 minutes on No.2 Court. Wimbledon 2022: Carlos Alcaraz Defeats Jan-Lennard Struff To Advance into Next Round.

Despite her high seeding, Wimbledon remains the only Grand Slam at which Kontaveit has yet to reach the fourth round. Kontaveit will face Jule Niemeier, of Germany, in the second round. The win was Kontaveit's first match since Paris, and since she split with her previous coach, Dmitry Tursunov, after less than a year of working together. She arrives at Wimbledon looking to start the second half of her 2022 season on a high note, having won back-to-back matches just once since reaching the final of the Qatar Total Open in February. She'll next face German Jule Niemeier, who won her first Grand Slam match against Wang Xiyu, 6-1, 6-4.

Just about 48 hours after winning her eighth career WTA Tour singles title in Bad Homburg, Germany, Caroline Garcia was back on the court and given a tough fight by 26-year-old British wildcard Yuriko Miyazaki. Garcia had to use all her expertise despite nearly 150 places in the rankings between the two, to win the match that went all the way. A third-set tiebreak played to 10 points, new at Wimbledon this year, was needed separate them; in the end, Garcia rallied from a set down and secured a 4-6, 6-1, 7-6[4] win in 2 hours, 17 minutes.

(The above story first appeared on LatestLY on Jun 28, 2022 01:34 PM IST. For more news and updates on politics, world, sports, entertainment and lifestyle, log on to our website latestly.com).