India's Ramkumar Ramanathan and his partner Tomislav Brkic from Bosnia and Herzegovina crashed out of the first round of the Wimbledon 2022 men's doubles event, here on Thursday. 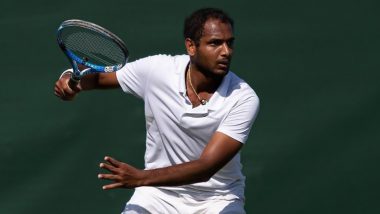 London, June 30: India's Ramkumar Ramanathan and his partner Tomislav Brkic from Bosnia and Herzegovina crashed out of the first round of the Wimbledon 2022 men's doubles event, here on Thursday. Ramkumar and Brkic, unseeded, lost to the American pair of Nicholas Monroe and Tommy Paul 3-6, 6-7(5), 6-7(5) in two hours and 10 minutes. Both sides matched stride by stride and held their serves after Nicholas Monroe and Tommy Paul began the proceedings. However, the American duo went on to win the first set after breaking Ramkumar and Brkic in the sixth game. Wimbledon 2022: Iga Swiatek Fends Off Pattinama Kerkhove’s Challenge; Katie Boulter Stuns Karolina Pliskova.

Thereafter, the Indian and his partner denied any opening to their opponents in the second set but conceded early in the tiebreaker to go down once again. In the third set, Ramkumar and Brkic, for the first time in the match, broke the service of the American pair in the third game. Trailing 4-2, Monroe and Paul mounted a comeback and stretched the set into the tiebreaker. Ramkumar and Brkic, despite trailing 5-0 in the seven-point tiebreaker, almost came back from the brink by taking five of the next six points. Rafael Nadal Makes It Past Ricardas Berankis To Secure Place in Third Round at Wimbledon 2022.

However, the effort proved to be too late as the American duo saw the challenge through to sail into the next round. Notably, Ramkumar was the only Indian men's tennis player competing in the main round of Wimbledon 2022. On Friday, six-time Grand Slam champion Sania Mirza and her Croatian partner Mate Pavic will take on Georgia's Natela Dzalamidze and Spain's David Vega Hernendez in the first round of the mixed doubles. Sania, who is competing at her last Wimbledon, went down in the opening round of the women's doubles event with Czech Republic's Lucie Hradecka at the ongoing Wimbledon on Wednesday.

(The above story first appeared on LatestLY on Jul 01, 2022 12:44 PM IST. For more news and updates on politics, world, sports, entertainment and lifestyle, log on to our website latestly.com).