World Environment Day is celebrated on June 5 every year and is the United Nations' principal vehicle for encouraging awareness and action for the protection of the environment. It was first held in 1974, and since has been a platform for raising awareness on various environmental issues. 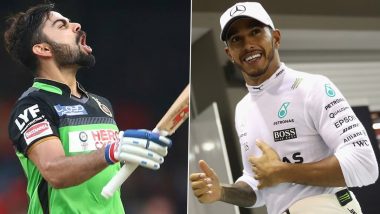 Sports Stars have one of the biggest platforms in the world to display their skills and talents and many are using this stage to raise awareness about some serious issues in our society. In recent times, more and more athletes are becoming aware of the influence they hold on the general masses and are now promoting several sustainable and social projects to help support the environment. So on World Environment Day 2021, we take a look at five athletes who actively participate in educating the importance of environmental sustainability. Here's Why Royal Challengers Bangalore Donned Green Jersey Against Chennai Super Kings in IPL 2020.

World Environment Day is celebrated on June 5 every year and is the United Nations' principal vehicle for encouraging awareness and action for the protection of the environment. It was first held in 1974, and since has been a platform for raising awareness on various environmental issues. World Environment Day is also a global platform for public outreach, with participation from over 143 countries annually.

The Indian cricket team captain contributes towards the ‘Go Green’ initiative along with his club Royal Challengers Bangalore. Every year, the IPL franchise wears a ‘green jersey’ to raise awareness about several environmental issues such as global warming, recycling and also encourages planting more trees.

Arguably the greatest female tennis player of all time, Serena Williams does her bit towards the protection of the environment. The 23-time grand slam winner’s clothing brand, Serena, is based on vegan, pollution-free products made in the USA.

The six-time F1 world champion promotes a plant-based diet to reduce the impact on the environment. The British driver switched to veganism in 2017 and also praised the diet for its positive effect on the environment. In order to his bit towards sustainability, the 36-year-old has also sold his private jet and reduced the use of plastic in his daily life.

Nico Rosberg, since retiring from F1 in 2016, has dedicated himself to sustainability projects. He now holds shares in environmentally conscious firms including Formula E, Tier Mobility, Lilium and Chargepoint, as well as becoming a founding member of the Greentech Festival.

The former AC Milan and Arsenal midfielder along with his friend Pasquale Granata founded GF Biochemicals (GFB) in 2008. It is the first company to mass-produce levulinic acid, a naturally occurring chemical and oil substitute that will help create a ‘greener’.

(The above story first appeared on LatestLY on Jun 05, 2021 08:05 AM IST. For more news and updates on politics, world, sports, entertainment and lifestyle, log on to our website latestly.com).