Apple Maps Adds Cycling Directions for Users in the US

Tech giant Apple has expanded the cycling directions in its Maps app to users in some cities in the US, including Chicago, Detroit and Columbus. 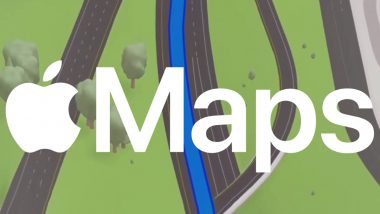 San Francisco: Tech giant Apple has expanded the cycling directions in its Maps app to users in some cities in the US, including Chicago, Detroit and Columbus. Introduced with iOS 14, cycling directions provide users with a wealth of information for their coming bike ride. Navigation assets include designated bike lanes, paths, inclines, stairs, and obstacles, reports AppleInsider. iPhone 14 May Include Satellite Connectivity for Help During Emergencies.

The new biking directions cover "all of Ohio and West Virginia and parts of Illinois, Indiana, Michigan, and Virginia," the report said.

This is a continuation of the rollout of biking paths within Apple Maps. On April 1, 2022, Apple added them to the Northeastern US. Apple Maps enthusiast Justin O'Beirne in a blogpost noted that biking expansion within Maps followed closely with its mapping developments. He suggests that the locations of the state of Texas and the Gulf Coast are likely to be next in receiving more detailed information for cyclists.

Apple Maps has continued to receive active expansion and increased support since its launch in 2012. In late March 2022, Apple expanded its coverage of metropolitan Canada with advanced navigation and 3D landmarks. With this latest update, Apple Maps now provides cycling directions for almost 26 per cent of US territory, with almost 52 per cent of the country's population covered, 9To5Mac reported.

(The above story first appeared on LatestLY on Apr 19, 2022 03:57 PM IST. For more news and updates on politics, world, sports, entertainment and lifestyle, log on to our website latestly.com).