Japanese company SkyDrive Inc working on their flying car project have reached a step closer to fulfilment. The company carried out the first test flight with one person aboard, several feet off the ground. The car hovered in a netted space for about four minutes. 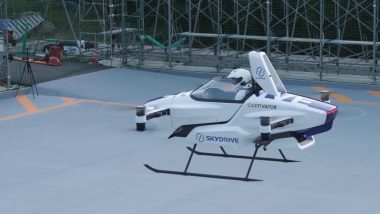 Remembering watching the cartoon The Jetsons and hoping one day the world would see flying cars? Well, we are in 2020 and looks like we are slowly getting there in the 21st century. Japanese company SkyDrive Inc working on their flying car project have reached a step closer to fulfilment. The company carried out the first test flight with one person aboard, several feet off the ground. The car hovered in a netted space for about four minutes. Although, the real-life product could be launched in the next three years as per the company CEO. Toyota Investing $400 Million in Electric Flying Car Company for 'Fast, Quiet and Affordable Air Transportation Services'.

Japan is known the world over for its efficient, fast and punctual transportation systems. Now they are venturing into the flying car space too. SkyDrive head Tomohiro Fukuzawa said, "Of the world’s more than 100 flying car projects, only a handful has succeeded with a person on board. I hope many people will want to ride it and feel safe." The car that looks like a swift bike took its test flight successfully. There were short and controlled manoeuvers. A computer-assisted control system helped ensure flight stability. White in colour, with the front a little like a plane, will remind you of The Jetsons! Flying Car PAL-V to Be Built in Guj, MoU Inked with Dutch Firm.

This vehicle or rather the aircraft is designed to be the world's smallest Vertical Take-Off and Landing (eVTOL) model. At a compact size, it would occupy not more than two parked cars. It has eight motors to ensure safety in emergency situation during flight.  The vehicle can as of now travel up to 5 kilometres which may not seem a lot. "We want to realize a society where flying cars are an accessible and convenient means of transportation in the skies and people are able to experience a safe, secure, and comfortable new way of life," said Fukuzawa in his statement. There are many other issues to be taken care of like battery sizes, air traffic control and other infrastructure issues. So although the company hopes to make them available by 2023, the safety concerns are of more importance right now.

(The above story first appeared on LatestLY on Aug 29, 2020 02:01 PM IST. For more news and updates on politics, world, sports, entertainment and lifestyle, log on to our website latestly.com).