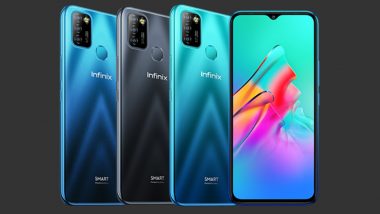 Infinix, the Shenzhen-based smartphone brand officially launched a new mid-range phone. Dubbed as Infinix 5 Smart, the phone also has been launched in Nigeria. However, reports are claiming that the phone has been launched in India as well. The handset is the newest offering from the Chinese manufacturer under the Smart Series, which already includes Smart 4 Plus that was launched in the country last month. The Smart 4 Plus retails in India at Rs 7,999. Coming back to the newly launched Smart 5, the phone gets triple rear cameras, a tall aspect ratio, a large-sized battery, and more. Infinix Hot 9 Pro with MediaTek Helio P22 SoC Goes on Sale in India; Check Prices, Offers, Variants & Specifications.

Talking about the specifications, it comes with a huge 6.6-inch LCD offering a resolution of 720 x 1600 pixels and an aspect ratio of 20:9. There's a 1.8GHz processor under the skin. According to a recent report, the phone packs an Helio P22 chipset. The processor is clubbed with up to 2GB and up to 32GB storage. It is important to note that the company is offering the Smart 5 for Nigeria with up to 3GB of RAM and up to 64GB storage. There is a microSD card slot for additional storage.

For photography, the Smart 5 comes equipped with a 13MP alongside two QVGA lens housed in a rectangular-shaped module. At the front, there is an 8MP selfie camera with dual flash. It is backed by a massive 5000 mAh battery supporting 10W charging. It runs on Android 10 OS. For connectivity, the handset is offered with dual SIM support, Wi-Fi 802.11ac, Bluetooth, GPS, micro USB, and 3.5mm audio jack. For security, the phone gets features like face recognition and rear-facing fingerprint reader.

As far as the prices are concerned, the newly launched Infinix Smart 5 Plus is priced from NGN 39,500 which is around Rs. 7,500. However, the price of the India variant is not yet known. It comes in three colours such as black, blue, and green.

(The above story first appeared on LatestLY on Aug 13, 2020 05:42 PM IST. For more news and updates on politics, world, sports, entertainment and lifestyle, log on to our website latestly.com).