LG has officially launched the new LG Q52 smartphone in its home market. The mid-range smartphone is introduced as a successor to the LG Q51 phone that has been on offer since early 2020. 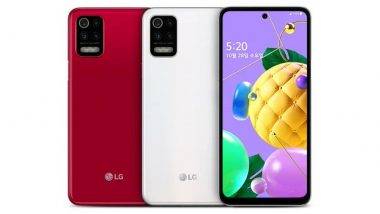 LG has officially launched the new LG Q52 smartphone in its home market. The mid-range smartphone is introduced as a successor to the LG Q51 phone that has been on offer since early 2020. The main highlights of the newly launched LG Q52 phone is an impressive IPS display, a 48MP quad Rea cameras, and 4,000mAh battery. Launched with a price tag of KRW 330,000 (around $299), the South Korean tech giant hasn't officially announced which other markets will be seeing the phone. It comes in two colour - Silky White and Silky Red. LG Wing Dual-Rotating Screen Smartphone to Be Launched in India on October 28, 2020.

The smartphone comes with a 6.6-inch IPS LCD punch-hole display featuring an HD+ resolution. The screen is fitted with a 13MP selfie camera positioned in the punch-hole design. The polycarbonate rear body design prevents fingerprint marks, thanks to a matte finish.

Under the hood, there is a MediaTek Helio P35 chipset which is clocked at 2.3GHz. As a reminder, the predecessor Q51 was powered by the Helio P22 SoC. The processor is coupled with 4GB of RAM and 64GB of onboard storage. The company has also provided memory expansion provision via microSD card.

The phone gets a quad rear camera module comprising a 48MP primary sensor with f/1.8 aperture, an 8MP wide-angle lens, a 2MP macro lens, and a 2MP depth sensor. The phone is backed by a 4,000mAh battery. It runs on Android 10 OS out of the box. For connectivity, the phone gets 4G, dual SIM support, Wi-Fi, Bluetooth 5.0, NFC, UBS-C, and a 3.5mm audio jack. It also gets a side-mounted fingerprint scanner.

(The above story first appeared on LatestLY on Oct 26, 2020 12:52 PM IST. For more news and updates on politics, world, sports, entertainment and lifestyle, log on to our website latestly.com).