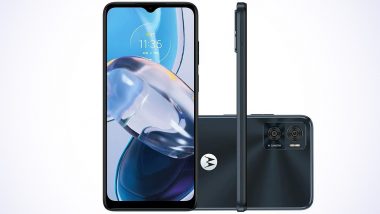 Motorola India officially launched the Edge 30 Ultra and Edge 30 Fusion smartphones this week. Now, the company is rumoured to introduce the Moto E22 Series soon. The Moto E22 Series is tipped to come with Moto E22 and Moto E22i models. According to tipster Paras Guglani, Motorola will launch the E22 on September 16, as a budget handset. It is said to be priced between Rs 10,000 to Rs 15,000 in India. Motorola Edge 30 Ultra, Motorola Edge 30 Fusion Debut in India; Check Price & Other Details Here.

In addition to this, the tipster has also shared renders of the Moto E22 smartphone. The handset will come with a gloss back panel, a dual rear camera setup, Motorola branding on the bottom of the rear panel and a flat-edge design. At the front, the smartphone will sport a waterdrop notch screen.

Moto E22 is said to feature a 6.5-inch IPS LCD display with a refresh rate of 90Hz. It is rumoured to be powered by a MediaTek Helio SoC and could pack a 5,000mAh battery. Moreover, the device is likely to run on Android 12 OS and may come with a 3.5mm headphone jack.

(The above story first appeared on LatestLY on Sep 14, 2022 02:11 PM IST. For more news and updates on politics, world, sports, entertainment and lifestyle, log on to our website latestly.com).